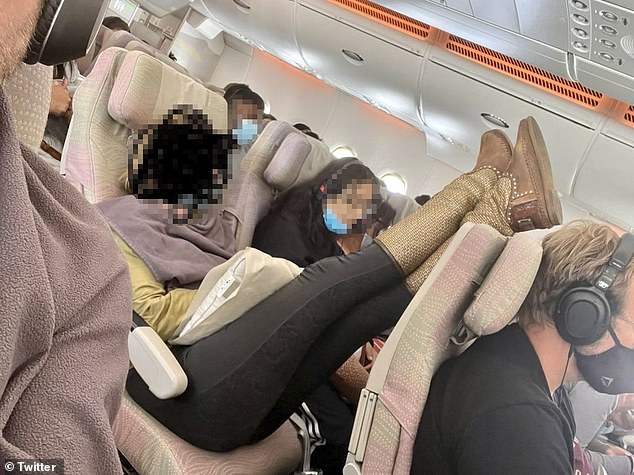 On a trip from Melbourne to Adelaide, a passenger surprised a man by placing her feet on the headrest of the person in front of her, prompting conflicting reactions online.

He saw the calm woman while on a Qantas/Emirates code-share aircraft, and he tweeted a photo of her with the comment, “The person next to me on my flight.”

In the photo, a woman wearing a pair of thick brown boots is seen putting her feet on the backrest of the seat in front of her, inches from the head of another passenger.

While most people thought the woman’s behavior was impolite, some turned their backs on the photographer and claimed the woman might be suffering from a “medical problem.”

Did you speak, or did you just snap a photo for Twitter? a user posted.

Another questioned, “Is she truly hurting anyone?”

Another person said: “If she’s not touching the guy in front, I don’t see the problem.”

According to one woman, she may have had a medical issue that “needed her legs to be raised when flying.”

The majority of users, though, continued to side with the passenger, calling the woman’s behavior “nasty” and “appalling.”

One user commented, “Worrying lack of consideration for others.”

Another person said, “OMG that is so horrible.”

The passenger responded that the passenger had been asleep the entire flight when asked why the man in front hadn’t complained.

Last month, a frightening image of someone stepping into another passenger’s personal space on a different interstate flight surfaced.

On a different journey from Melbourne to Adelaide in May, the barefoot passenger could be seen pushing their foot through the space between the side of the plane and the seats in front of them in the Instagram video.

Several remarks on the passenger’s impolite gesture were made in response to the video.

One more responded, “Oh heck no.”

A third added, “Your worst nightmare.”