Skip to content
Home » News » News » A majority of Republicans believe the Capitol riot was an ‘act of patriotism,’ new poll shows 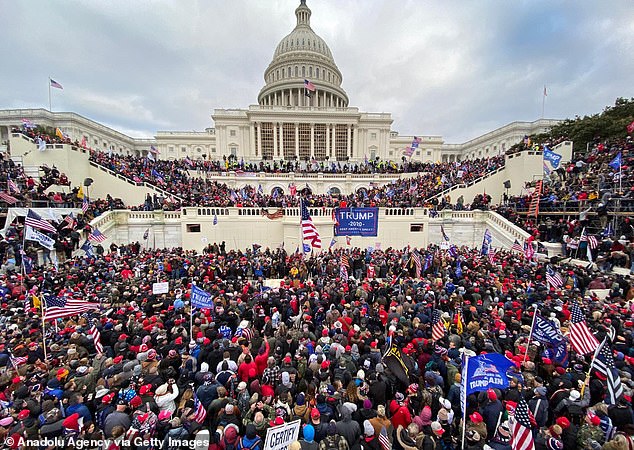 A majority of Republican respondents to a new poll believe the January 6th attack on the US Capitol was an ‘act of patriotism,’ while both GOP and Democrat voters are concerned the other will act to overturn an election if it doesn’t work out in their party’s favor.

Political divisions appear to remain at an all-time high with less than nine months until voters across the country decide which party will control Congress for the remainder of President Joe Biden’s term.

However, both sides agree the United States and its democracy are in a dire state, according to a poll published by The New Republic late last week that saw 74 percent of respondents say the American political system is ‘threatened.’

Fifty-seven percent of GOP voters believe the Capitol riot was an ‘act of patriotism’ rather than an ‘insurrection,’ more than a year after the day Donald Trump’s supporters disrupted a Joint Session of Congress; 42 percent view it negatively.

Democrats feel much stronger on the issue, with a whopping 88 percent denouncing the riot as an ‘insurrection.’ Just 12 percent called it ‘patriotism.’

A majority on both sides — 64 percent of Democrats and 75 percent of Republicans — are ‘worried’ about the trajectory of US democracy over the next decade or two.

But voters on both sides of the aisle also appear to view the other as a threat to it. On a list of issues that survey respondents were asked to weigh in on being ‘a serious threat to democracy in America,’ a majority of Democrats and Republicans both said they view ‘the possibility of political violence’ in that light.

Putin’s forces ’round up Ukrainian men in Mariupol and force…

‘We WILL rebuild Mariupol’: Ukraine’s richest man pledges to…

Zelensky warns ‘we must prepare’ for Russian nuclear attack…

Democrats, however, are widely concerned about ‘Republicans make it harder for people to vote’ by a margin of 85 percentage points to 15. A hefty 84 percent of GOP voters denied it was a problem for US democracy.

Thirty-four percent of Democrats said the same about their own party, while 66 percent said it’s not a threat.

Seven in 10 Democrats reported believing that Republicans will work to overturn the results ‘if the Democratic nominee is declared the winner of the next presidential election.’

Even more Republicans, when asked the same about Democrats, said they’d try to overturn the race — 79 percent.

Both parties also remain split about Trump, who has dropped numerous hints that he’s mulling a third re-election attempt in 2024.

More than eight out of 10 Democrats think Trump’s baseless claims that the 2020 election was rigged in President Joe Biden’s favor are a threat to democracy, compared to 19 percent of Republicans who said the same.

By contrast, 81 percent of GOPers shrugged it off as ‘not a threat.’