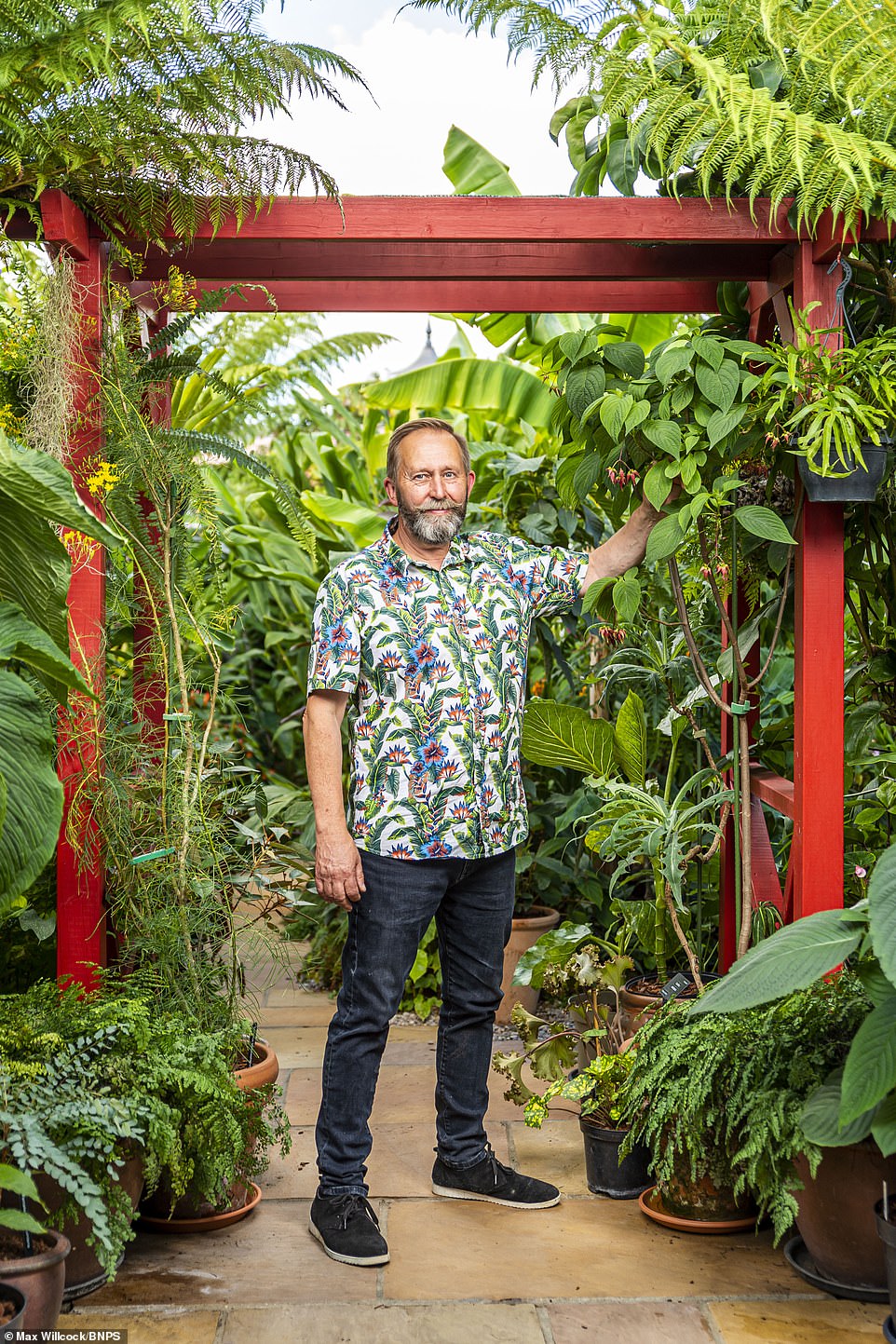 As millions of Britons face a hosepipe restriction, a green-fingered parent who has spent more than 25 years transforming his garden into a tropical rainforest claims to have conserved hundreds of litres of rainfall to preserve his exotic plants from England’s coming drought.

The remarkable species in Mike Clifford’s 65-foot-long garden behind his suburban cottage in Poole, Dorset, are native to South and Central America, Africa, and China, and many of them are in danger of becoming extinct because of the lack of rain.

The 61-year-old says he has constructed a system of water butts buried beneath the ground that contain over 2,000 litres of rainwater collected in winter, which he hopes will be enough to save his garden despite the fact that there are no formal restrictions in place where he lives.

However, future ones have not been ruled out as another heatwave scorches Britain.

Mr. Clifford soaks the plants with two hosepipes and submersible pumps that are attached to the butts. He will be able to save the garden for next year if his water supplies continue until September.

The majority of his micro-jungle will subsequently be dug out and packed away in a laborious attempt to keep it from freezing over the winter.

The 61-year-patch old’s is a lush green in contrast to how dry his neighbours’ plants seem in overhead images.

“The hot weather has impacted each species differently,” the enthusiastic gardener stated. “Many of the plants, like the gingers, have had an early flowering.”

It’s lovely to be able to enjoy them a little bit early since we often anticipate them to blossom in September, just a few weeks before they need to be stored for the winter. However, plants with large leaves dislike the heat.

They are horribly withering. You may see it occurring if you step outside around noon.

I attempt to water them less even though I do quite a bit. I have water butts buried 4 feet below the surface.

A possible hosepipe restriction is a concern, but since the season is winding down, as long as it lasts till September, I’ll be content.

Following the disclosure that three more water suppliers are considering limitations due to a leaked document, millions of Britons may soon be prohibited from using hosepipes.

When Mr. Clifford replants the species in the spring, the remarkable flora may reach heights of up to 12 feet over the summer.

A number of new arrivals have materialised for him this year, including the highly endangered St. Helena Ebony, or Trochetiopsis ebenus, which is very unusual.

Before two little plants were discovered in Mexico stuck to a rock, experts thought the 4 ft tall plant with large white blossoms had gone extinct.

In order to propagate more of the same species, they collected cuttings from the plants and shipped them to London’s Kew Gardens.

After seeing a television programme on the topic in the 1990s, Mr. Clifford decided to start gardening in the tropics.

He and his wife Tina have collected thousands of pounds for charity over the years by frequently opening their garden under the National Garden Scheme.

Ten years ago, the couple moved into the bungalow and dug up the majority of the plants from their previous home.

They have huge Canary Island dandelions in their yard, as well as the central African species Pararistolochia goldieana, which has never blossomed in Europe.

Additionally, shamans in South and Central America have historically employed the hallucinogenic characteristics of the Angel’s Trumpet to create visions.

Along with his full-time profession building mobile homes, Mr. Clifford takes care of his plants in the evenings and on the weekends. Harry, his 26-year-old son, assists with the hard lifting.

Three greenhouses and a summer home are where Mr. Clifford keeps his plants during the winter. those who must be left outside and covered with fleece.

The task is often completed over the course of two to three weekends.

A ban will be announced soon, according to Thames Water, the largest water provider in Britain, which serves almost 15 million people.

And a confidential Environment Agency document obtained by the Daily Mail indicates that Yorkshire, with five million users, Severn Trent, with eight million, and South West, with up to two million, are the water firms debating whether to implement a ban.

If passed, almost 33 million individuals will be subject to a hosepipe ban.

In the meantime, Liz Truss, the front-runner for the Tory leadership, has commented on hosepipe bans after two water companies announced others warned they may need to follow suit, following the driest July on record for some areas of southern and eastern England, as well as the driest eight months from November to June since 1976.

There have been ominous predictions that a three-month drought is possible. Until October, river flow levels are expected to remain “exceptionally low,” according to the UK Centre for Ecology and Hydrology.

Parts of London, Surrey, Berkshire, Oxfordshire, Wiltshire, and Kent are serviced by Thames Water. Despite leaking 635 million litres of water every day from its pipes, it has banned hosepipes.

This week, when the Environment Agency is anticipated to announce that England is in a state of drought, there may be further pressure on water providers to take action.

The restrictions make it illegal to use a hosepipe to irrigate a lawn, wash a vehicle or boat, or fill ponds, and doing so is punishable by a £1,000 fine.

According to the Environment Agency’s sliding scale, we are now one step away from a drought, a spokeswoman stated.

If the current dry weather pattern persists, drought conditions may spread throughout areas of England.

According to Ms. Truss, the water providers need to be held more accountable and more action has to be taken to fix the decades-old faulty pipes.

In Norfolk, a region of the nation that is unusually dry, I have a lot of problems with my water provider, and those businesses need to be held accountable.

Hosepipe bans “should be a last option,” she said to the Daily Express, adding, “What I’m concerned about is it appears to be a first approach rather than the water providers dealing with the leaks.”

Droughts are more likely to occur as a result of climate change, which is fueled by greenhouse gas emissions from burning fossil fuels and other human activities, according to scientists.

The likelihood of heat waves is also increasing due to climate change, with last month’s record temperatures becoming at least 10 times more probable and “nearly impossible” without it, according to study.

In response to a question about whether a hosepipe ban would be implemented in London, government minister Paul Scully said that it is “always smart” for people to save water.

The entire thing about London and the South East is that the more development you have and the less rainfall there is, then clearly there’s less to go around and we’ve got to be cautious, so we’ll look carefully, he said.

It arrived in a tinderbox. The temperature in southern regions of England is expected to hit 93 degrees Fahrenheit today, making it “lethally hot” in Britain.