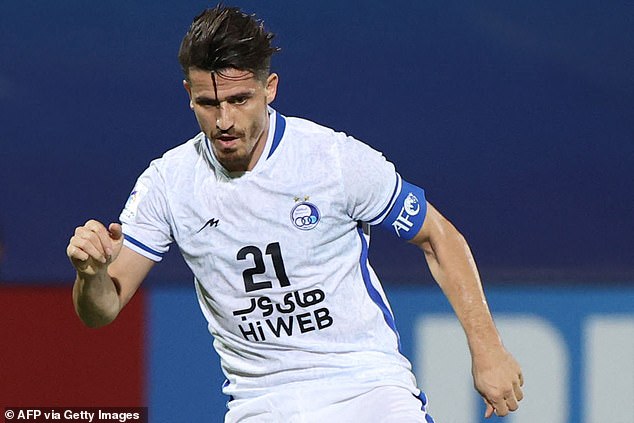 Iranian security forces today arrested a national football player for criticising the government over the crackdown on protests that have engulfed the Islamic Republic for months.

Voria Ghafouri was detained in Iran during a training session with his local club Foolad Khuzestan. Ghafouri was cut from Iran’s national team prior to the Qatar World Cup due to his criticism of the regime.

According to Fars News agency, the 35-year-old was detained on allegations that he had “tarnished the reputation of the national team and promoted propaganda against the state.”

Ghafouri was also accused of assisting “rioters,” a phrase used by the Islamic states to refer to the anti-government demonstrators who have been protesting since September 16, when Mahmoud Amini died in the hands of Iran’s morality police.

Three days after her detention in Tehran for allegedly violating the Islamic dress code for women, the 22-year-old died.

Today, Iranian security authorities detained a national football player for criticizing the government’s crackdown on months-long demonstrations that have enveloped the Islamic Republic.

Ghafouri has been an outspoken opponent of the Islamic rule and its deadly response to the demonstrations, which has resulted in the deaths of at least 400 people.

He was mentioned as a part of Iran’s 2018 World Cup team, but he did not make the final roster for the tournament in Qatar.

Before his contract was cancelled and he transferred to Foolad Khuzestan, Ghafouri was the captain of Iran’s premier team Esteghlal.

Many supporters speculated that the termination of his career with Esteghlal was retribution for his backing of earlier demonstrations this summer.

The Iranian government summoned Ghafouri in 2019 after he challenged Iran’s hardline foreign policies. He stated that the country’s actions regarding the Israeli-Palestinian issue, Lebanon, Yemen, and Syria were detrimental to the Iranian people.

Iran’s World Cup-competing footballers were warned by officials in Tehran that they will suffer consequences for their “insulting” choice not to perform their national anthem before to their match against England in Qatar.

An Iranian official warned that the squad might suffer repercussions if they fail to sing Iran’s national song in their remaining World Cup games, therefore all eyes will be on the team during their game against Wales on Friday.

According to The Guardian, the leader of Tehran’s municipal council, Medhi Chamran, vowed that the country “would never allow anyone to offend our national anthem.”

The Iranian national team remained stone-faced as the national anthem played at Khalifa International Stadium on Monday, prior to their 6-2 loss to England in the World Cup.

It was perceived as a show of solidarity with the demonstrations presently sweeping Iran in the wake of Amini’s murder.

Iranians mourn in front of the coffins of people killed in a shooting attack, during their funeral in the city of Izeh in Iran’s Khuzestan province, on November 18. In some of the worst violence since the protests erupted, assailants on motorbikes shot dead seven people, including a woman and two children aged nine and 13, on November 16

The Iranian national team remained stone-faced as the national anthem played at the Khalifa International Stadium on Monday, before to their 6-2 loss to England in the World Cup.

As a result of Chamran’s statement on Tuesday, the Iranian national team may now risk repercussions for their act of disobedience.

The Iranian civilization has a history of many thousand years, making it as ancient as the combined European and American civilisations.

According to the Guardian, a hardline Kurdish lawmaker has also demanded that the Iranian national football squad be replaced with young men and women eager to perform the national song.

After the Iranian players refused to perform the national anthem, a top British lawmaker stated that their lives are now at “serious and severe” risk.

Alicia Kearns, head of the Foreign Affairs Committee of the House of Commons, stated that Britain should back Iranian international footballers if they seek sanctuary following their “quite daring and courageous political statement.”

Iran’s severely regulated media hardly mentioned the Iranian team’s refusal to perform the national anthem, although the ultraconservative publication Kayhan criticized “some players” for their silence.

Throughout the football game, Iran supporters in the crowd yelled Amini’s name, brandished placards and donned T-shirts with protest messages, and jeered during the national anthem.

In the stands, supporters of the Iranian squad were spotted carrying anti-regime banners in support of rallies that have occurred in Iran over the previous two months.

During the World Cup match between Iran and England in Qatar, demonstrators in the audience hold up protest placards.

Another hard-line newspaper, Vatanemrooz, stated that Iranian demonstrators celebrated their country’s humiliating loss in the streets, cheering in coffee shops as England scored goals and blaring vehicle horns after the match.

A coffee establishment in the northern city of Mashhad was shut down after expressing its support for England.

The pro-reform Shargh daily of Iran remarked, “None of the players were spiritually prepared.”

The nationwide protest movement initially targeted Iran’s mandatory hijab, or headscarf, for women, but quickly shifted to calls for the ouster of Iran’s ruling Shiite clerics.

After meeting with President Ebrahim Raisi at a farewell ceremony where they remained silent on the subject of protests, the players faced a barrage of public criticism last week. Several athletes were photographed bowing to Raisi.

On November 18, Iranians grieve in front of the coffins of those killed in a shooting attack during their funeral in Izeh, Khuzestan Province.

On November 16, assailants on motorcycles shot and killed seven people, including a woman and two children aged nine and thirteen, in some of the worst violence since the protests began.

Since protests began in late September, it is believed that over 400 civilians have been killed, with many more injured and arrested.

More than two months of anti-regime demonstrations in Iran have been sparked by the death of Amini in police custody after she was arrested for failing to wear a mandatory hijab.

Since then, there have been near-daily demonstrations demanding an end to the country’s strict interpretation of Islamic law and the ouster of the mullahs’ regime.

It is believed that hundreds, if not thousands, of demonstrators have been killed by security forces in an increasingly violent crackdown despite widespread internet outages in the country.

Rights groups accuse security forces of firing live ammunition and birdshot at demonstrators, as well as beating them with batons, as evidenced in a number of online videos.