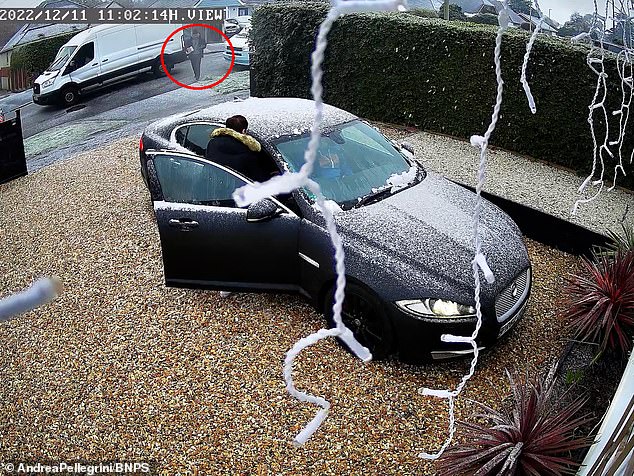 A delivery man was seen rushing after his own van as it slid down an icy residential street.

While delivering a Christmas gift to homeowner Andrea Pellegrini, the courier was unaware that his white transit van was moving away behind him.

It wasn’t until a neighbour yelled, ‘Mate, your van,’ that he raced after it, only to slip on the ice and fall.

Before using the brakes, the driver recovered his balance and managed to catch up with the racing car.

The vehicle, which had its handbrake on at the time, ‘came within inches’ of colliding with parked automobiles but luckily avoided collision.

The unidentified courier turned the van around, and neighbours helped him push it back up the slope so he could make his next delivery.

Andrea Pellegrini, 47, whose doorbell camera caught the slap-stick incident outside her home in Bournemouth, Dorset, said: ‘The road can get really bad in the winter with ice. It dips down because right at the bottom is a valley. Kids often go down on their sledges when it snows.

I was expecting a few parcels so thought it would be for me. He got out the van and came to meet me.

‘I didn’t notice what was happening until my neighbour, who was scraping ice off his car, shouted ”Mate, your van” – we looked around and saw it rolling down the hill. I just thought ”oh my god its going to hit so many cars”.’

Ms Pellegrini added: ‘When we fell he dropped the pad used to take pictures of the delivery.

‘I picked it up and once he managed to get his vehicle back I gave it to him only for him to say he still needed to take the photograph to confirm delivery. What a pro’.