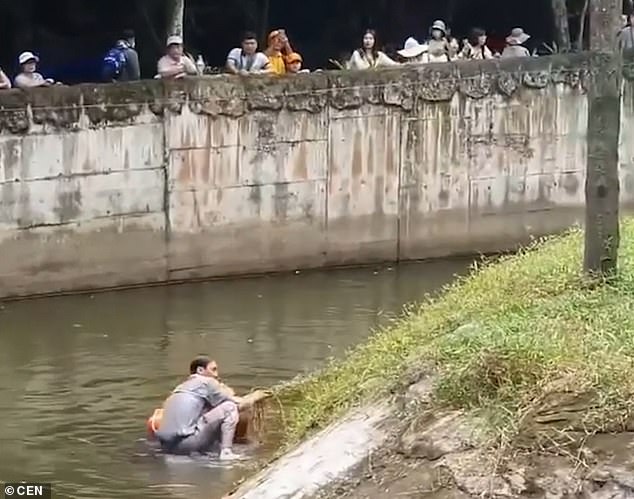 A brave zookeeper dove into a moat to save a drowning orangutan, dragged him to land, and performed CPR on him.

When an observer threw food into the moat surrounding the orangutan’s cage at the Vinpearl Safari Park on the Vietnamese island of Phu Quoc, the orangutan tried to reach it and fell into the water.

A second orangutan runs to the edge of the moat in an apparent attempt to assist the animal as it falls beneath the water’s surface while thrashing its arms in the air.

The zookeeper, however, reacted fast and dove into the river while carrying a lifebuoy ring while fully clothed from a nearby path.

As he desperately searches the depths of the moat for the orangutan, the man is seen repeatedly diving underwater.

The zookeeper eventually locates the orangutan and raises its lifeless corpse to the surface while making sure to maintain its head above the water.

The zookeeper is shown swimming toward the shore while holding the monkey in his arms, with some difficulty, as onlookers watched the rescue take place in front of them.

He tries unsuccessfully to get the orangutan onto the concrete ramp, but eventually gets him onto the ground and drags him up the slope.

In other video, an orangutan is seen being revived by a zookeeper using CPR as it gasps for air.

The ape miraculously survived the trauma and is now in a stable condition, the zoo claimed, owing to the keeper’s efforts.

A zoo representative said the facility has signs telling visitors not to feed the animals unless specifically permitted, yet many people still do so.