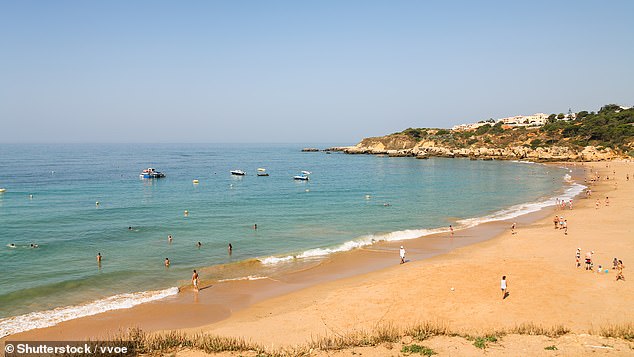 A British tourist who was swimming in the ocean at a popular Algarve beach has collapsed and died.

When he emerged from the water, however, he felt ill and collapsed on the beach.

Emergency services arrived to the area at 1.30pm on Thursday amid reports he had suffered a heart attack.

They attempted CPR, but he was declared dead at the site.

The National Maritime Authority said in a statement, ‘Upon arrival at the scene, it was discovered that the victim, a 55-year-old man of British nationality, was being assisted by lifeguards on duty on the beach, with the assistance of nearby individuals, until the arrival of Albufeira Volunteer Firefighters and an Emergency and Resuscitation Medical Vehicle (INEM) crew who began resuscitation manoeuvres on the victim.’

Firefighters then transported his body to the Legal Medical Office of Portimo.

After a swim in the Mediterranean, a 64-year-old British tourist collapsed and died on the beach in front of her spouse earlier this month.

Deborah Hooper was with Andrew Ashman, a 72-year-old retired accountant, when she reportedly experienced a heart collapse in strong seas.

When tragedy struck, the couple was strolling along a beach in Punta Secca near Ragusa on the Italian island of Sicily.

The Italian authorities believe she suffered “some sort of medical issue” while swimming.

The 64-year-old woman was rescued from the river by bystanders, but she could not be saved despite the best efforts of the medical staff.

The beach is famous for being the beachfront residence of the popular Italian television detective Inspector Montalbano, whose opening credits are seen on BBC television.

The woman died after a 62-year-old British man died on the Greek island of Crete while on vacation with his wife.

The man, who has not been identified, walked toward the water but became ill and returned to his sunbed on the beach of Stalida, next to his wife.

But as he lay on the sunbed, he passed away.

Local media indicate that an ambulance was called and the man was pronounced dead at the site. It is believed that an autopsy will disclose the cause of death.

On October 5, the body of a 74-year-old British woman who drowned while on vacation in Crete was discovered on a beach on the Greek island.

Rescuers performed CPR on the woman for thirty minutes, but she did not respond. She was taken to General Hospital St. George but was confirmed dead upon arrival.

A 45-year-old British woman died last month after feeling ill while swimming in Albufeira, Portugal. The woman fainted on the beach and medical personnel attempted to revive her, but she died on the coastline.