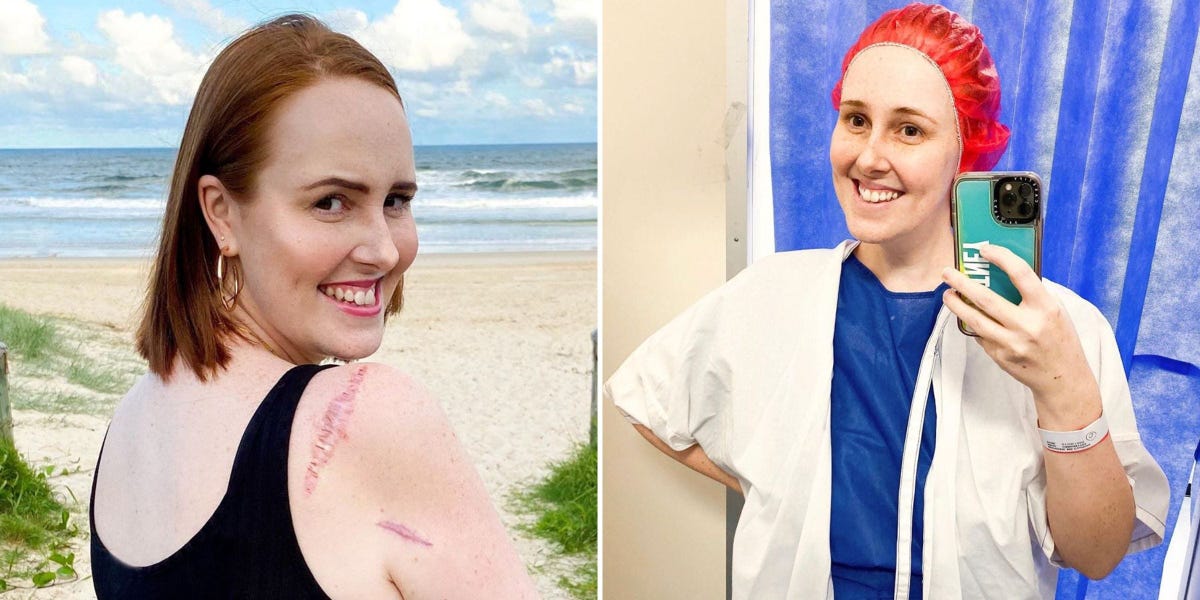 A 29-year-old lady was “totally astonished” when physicians informed her that a mole on her right shoulder had transformed into an aggressive cancer that would spread to her gut and thigh over the course of many years.

Courtney Mangan, from Australia, told Insider that she had been aware of melanoma, a rare form of skin cancer she was diagnosed with, since she was a child. Her father first got it when he was 12 years old and her maternal uncle died from the disease, which often invades other sections of the body.

She did not believe she was at risk, in part because she was a “redhead” with brown eyes, as opposed to green or blue eyes, and she could tan.

Although those with fair, easily-burning skin and blond hair are more likely to get melanoma, anyone can develop the illness.

According to the British Association of Dermatologists, excessive exposure to UV rays from sunlight or sunlamps is one of the “most significant” causes of melanoma.

Mangan stated that her mole was precisely where the sun hit her while driving her automobile.

“You apply sunscreen when you’re sun bathing at the beach or you’re lounging around having a cocktail at the pool, but it’s all those incidental times, like driving the car or grabbing a coffee, that you don’t really know how destructive it is,” she added.

People with red hair are also at a higher chance of acquiring melanoma, as well as those with a family member who has had the condition, such as Mangan.

According to data from the National Institutes of Health, there have been an anticipated 99,780 new instances of melanoma in the United States this year, and approximately 7,650 individuals are expected to die from the disease. According to the Australian government, an estimated 17,756 new cases of melanoma would be diagnosed in Australia in 2022.

A harsh realization to the severity of melanoma

In December 2017, Mangan’s closest friend’s father, a family physician, observed a mole on her right shoulder and recommended that she contact a specialist. The specialist diagnosed her with melanoma three days later, and she had surgery to remove the deadly mole within weeks.

Mangan, now 36 years old, stated, “I was a little naive about how serious melanoma is and how severe it can be.” “I believe that many young individuals believe that if you remove the mole, you will be safe and may move on with your life.”

Two years later, Mangan discovered a pea-sized bump that she assumed was a pimple beneath the skin of her right arm, which she showed to a doctor.

“I had to grip his finger in order to indicate its location,” she explained. This physician sent the patient to a melanoma specialist.

A PET scan revealed that the melanoma in her arm had migrated to the lymph nodes. The expert indicated that he’d medically remove it within days, and informed Mangan her odds of life for the next five years were 18% if she merely had surgery.

“It was an unpleasant shock,” Mangan remarked.

The doctor explained she also needed a medication, termed immunotherapy, that employs the body’s immune system to attack malignant cells.

“It is still very new compared to other cancer therapies, so I was obviously and reasonably terrified, but also hopeful that it would cure me,” she added.

Before she could begin, the physicians advised Mangan to have her eggs frozen, as immunotherapy might impair fertility.

“It’s difficult to consider your future when you’re unsure if you have one,” added Mangan, who was unattached at the time.

Recognizing its utility, she saved six eggs that she can use after five years of being cancer-free.

She ceased breathing during a cancer treatment, according to Mangan.

Mangan started the treatment at a local clinic, but 20-minutes after taking the immunotherapy medicine, she felt lightheaded and her heart started beating. The negative effects worsened with each treatment session. During the fourth treatment, her breathing ceased.

Doctors informed her that they believed she was allergic to the medication and that she would need to visit the hospital every two weeks to take additional drugs, such as steroids and antihistamines, to prevent a reaction.

“I would be checked into a hospital room alone for around eight hours,” she claimed of the sessions, which took place primarily during the COVID pandemic, when hospital rules prohibited her from having a companion. She said the medications rendered her unconscious within minutes.

The cancer metastasized to Mangan’s colon.

Two months after completing therapy, a routine PET scan revealed that Mangan had colon cancer, and she underwent surgery to have it removed. Three months later, it migrated to her thigh.

Doctors informed her the cancer was spreading swiftly to other parts of her body.

Four years after her original diagnosis, in December 2021, the physicians offered her a second immunotherapy treatment with severe adverse effects.

“The physicians told me that they would be shocked if I could take more than two dosages before my body shut down and I had to go to the hospital, with colitis or autoimmune illnesses and a multitude of other problems,” she claimed.

Mangan stated that whereas her pregnant friends had “go-bags” at home, ready to take to the hospital when they gave birth, she had one in case of terrible side effects.

Mangan’s cancer has “disappeared,” but he is still receiving treatment.

The scans revealed that Mangan’s cancer had “disappeared” after he received all four doses of immunotherapy with no major adverse effects.

She will continue to receive immunotherapy once a month for one hour for at least two years.

She becomes forgetful, her joints become uncomfortable, and she frequently develops ulcers and oral thrush.

The most difficult aspect, though, is “the mental side,” she remarked.

“In my age bracket, individuals are getting married, purchasing homes, and having children. They are in the box-checking era of their thirties, whereas my box is simply to stay alive “She stated,

Her life’s aim is to raise awareness by sharing her tale.

She added, “I have no control over what happens to my own life at this moment because it’s in my doctor’s hands, but by being very vocal, honest, and genuine, I could potentially save someone else’s life.”

»A 29-year-old woman felt tanning would prevent skin cancer. Her shoulder mole progressed aggressive malignancy to her gut and thigh«