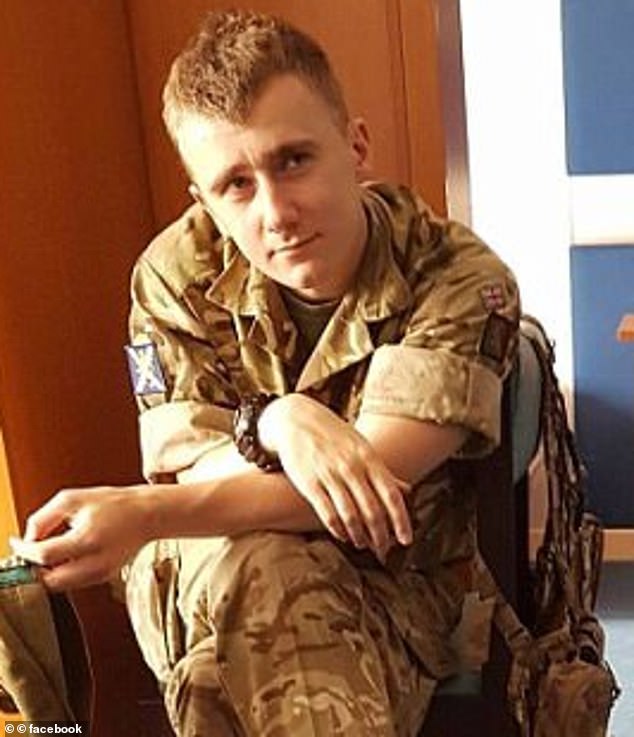 The accidental shooting death of a soldier during a “pitch black” nighttime training exercise was determined by the jury.

The judgement was rendered today after five days of testimony in the August 2016 death of Private Conor McPherson at Otterburn Training Area.

The Northumberland Coroner’s Court inquest heard that the 24-year-old, who was serving with A Company, 3 Scots – The Black Watch, was shot through his helmet and had a fatal head injury.

Neil and Betty McPherson, the parents of Private McPherson, did not attend the final day of the trial, but the jury determined that their son’s death was accidental.

Senior Coroner Andrew Hetherington told the jurors, ‘As you would imagine, Neil and Betty found the testimony quite difficult to hear.

They informed court personnel that they now had closure and are free to go forward.

During testimony at Morpeth County Hall, jurors heard that Private McPherson from Paisley, Renfrewshire, died at the scene despite resuscitation efforts.

Private McPherson was one of five troops participating in the practice on the training area when a weapon was fired, causing him to fall to the ground.

The court heard that this was the first time his suspected killer had participated in a nighttime activity without lights.

During his testimony, the soldier stated that he could not see Private McPherson or the target due of the darkness.

One of the five troops said that he did not fire his rifle all evening because he was unable to see anything.

The court heard that no thermal tape was placed to the targets before to the exercise, and that Private McPherson wore different night vision goggles than the rest of the team.

The testimony of Dr. Jennifer Bolton, who conducted an autopsy and determined that a head injury was the cause of death, was presented.

She informed the court that Private McPherson sustained one serious injury, a bullet wound to the right side of his skull.

The court was informed that the injury would have rendered Private McPherson instantly unconscious and unaware of his condition.

In addition, jurors were informed that a Range Action Safety Plan had been created prior to the training exercise, but that it had been rejected as insufficient.

The court was informed that a service inquiry report revealed a number of shortcomings in the lead-up to the training exercise.

Private McPherson was murdered in what “should have been a very regular live-firing night practice,” according to the conclusions of the Defence Authority’s Service Inquiry, which were read out in court.

It was the team’s first nighttime Fire Team Attack (FTA) without illumination, but the inquiry revealed that it was ‘possibly too rapid’ and unnerved a portion of the platoon.

The study stated that a walk-through of the firing range was not undertaken, and that soldiers who had already finished the range struggled owing to a lack of experience firing at night, despite no concerns being voiced at the time.

According to the investigation, it seemed likely that Private McPherson was killed by a fellow soldier who mistaken him for a target.