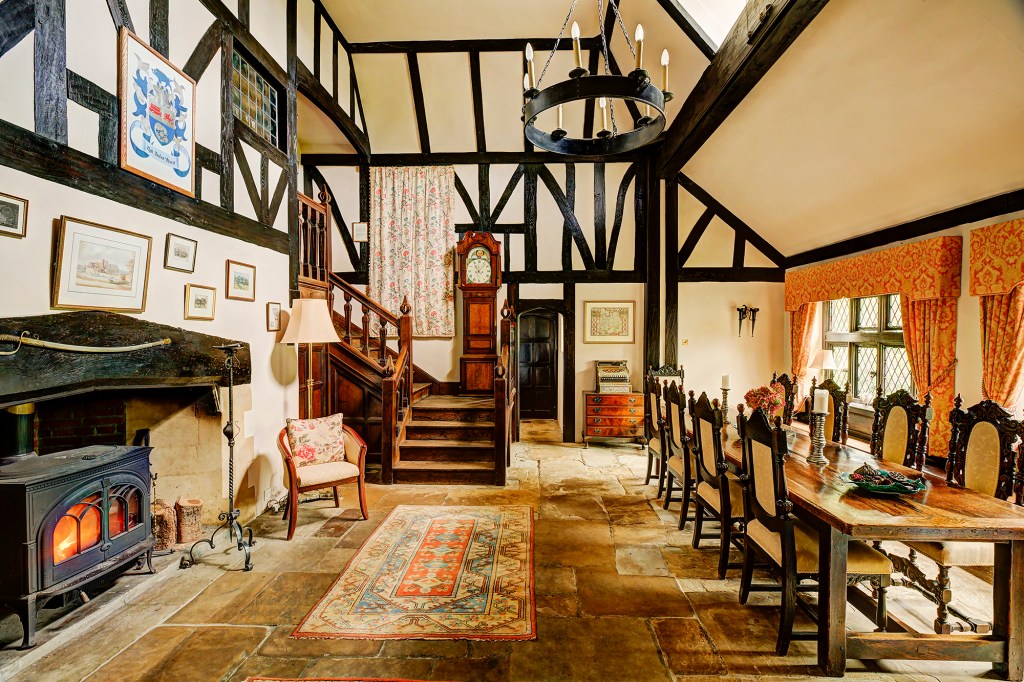 Talk about purchasing an authentic piece of history!

According to Mansion Global, this mansion is the oldest continuously occupied dwelling in England.

The ancient, magnificent residence boasts both an indoor pool and a moat, mixing the old with the new.

Welcome to Great Tangley Manor in Surrey, an 11th-century estate presently on the market for $13.5 million. King George V and Queen Mary signed the dining room’s window with a diamond ring.

Phillipa Dalby Welsh of the Savills Country Department stated in press materials received by The Post, “Not many homes can lay claim to once being a 12th century Royal hunting lodge, having timbers reputedly from the Spanish Armada, a William Morris design named after it that featured in Queen Victoria’s Windsor apartments, and renovations by one of Britain’s most iconic Arts & Crafts architects.” “This property is a perfect example of how, when well maintained, residences can adapt to the changing demands of their owners without compromising their architectural integrity and rich history.”

Various royals have left their signatures within the manor.

The estate’s foundations date back to 1016, and it has never been vacant in the intervening 1,006 years. During that time, many British kings have become attached to the lodge, which has also been enlarged upon and outfitted by various respected architects. Following a fire in the 12th century, a piece of the property was rebuilt as a medieval hall house. These Spanish Armada timbers were added after a former resident fought for the Crown and received them as a reward.

In addition to royals, Virginia Woolf, her father, and sister Vanessa Bell are known to have visited the home, and Gladys Vanderbilt is said to have given birth to her second child in Tangley in 1913.

Formerly divided into two wings, the manor’s most recent owners united them, utilizing the former Great Tangley Manor Wing as their permanent house and the Great Tangley Manor West wing as a vacation rental. The main wing features a living room, a dining room, a 40-foot heated indoor pool, a sauna, a study, five bedrooms, two dressing rooms, and three bathrooms. The West wing is equipped with a separate entrance, three reception areas, a kitchen, an office, five bedrooms, and three bathrooms.

Oliver Custance Baker, head of the country department at Strutt & Parker, remarked that despite the house’s grandeur and stature, it is friendly, reassuring, and charming. “For a place that celebrated its millennium in 2016, it is an honor to be a part of the selection process for the future steward of such an important piece of this nation’s heritage.”