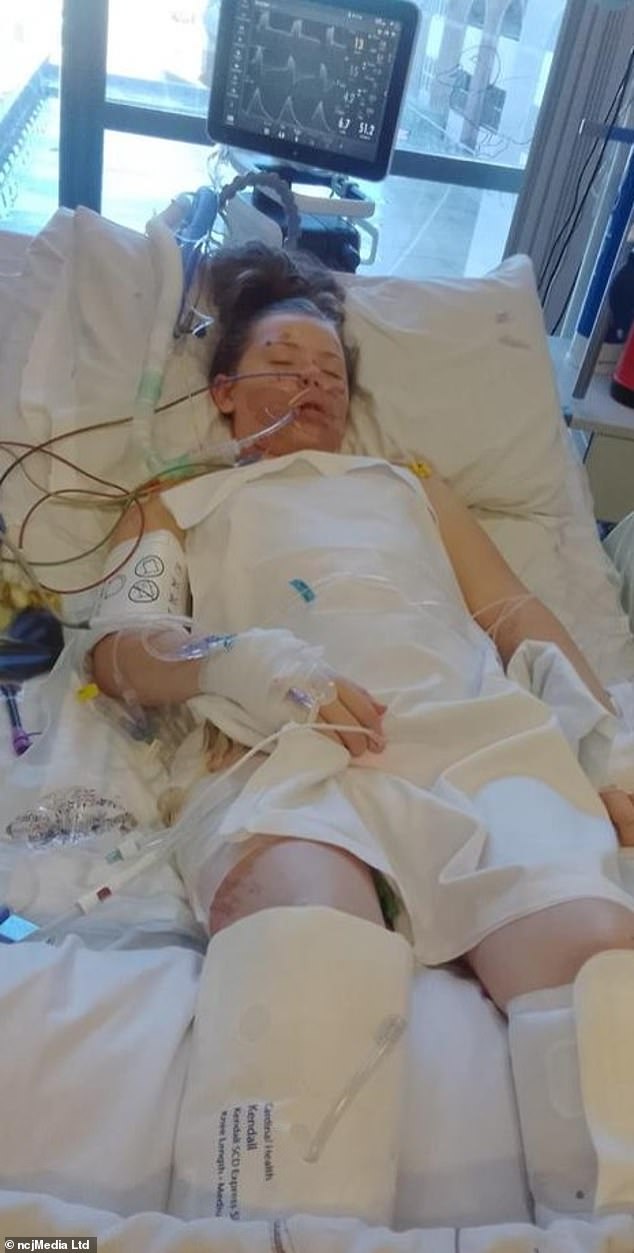 A 10-year-old girl is fortunate to be alive after being struck by a car in Northumberland on her way to school.

Holly Blakey was struck by a vehicle while walking to Newsham Primary School on Newcastle Road in Blyth. She was transported to Newcastle’s Royal Victoria Infirmary (RVI).

Her pelvis was crushed, her bladder was torn in half, and her blood-filled lungs were damaged.

She endured an eight-hour surgery and was induced into a coma.

Holly is currently stable, but remains hospitalized. Two metal rods were placed to her pelvis to stabilize it, leaving her with a scar across her abdomen.

Natalya Page, the step-mother of Holly’s older sister Kacey Leigh King, 16, stated, ‘When she went into surgery, we did not expect her to survive. The most serious phase of her injury is past, but she is still in excruciating pain.

Holly’s mother Michelle McFarlane, who is also the mother of Kacey, Lilly Blakey, 11, and AJ Wells, 6, was informed about the crash by a man who knocked on her door.

Michelle McFarlane, 34, who had one of her legs amputated this year below the knee, has spent the last few weeks by Holly’s side in the hospital.

The accident occurred about 8:15 a.m. on November 2 of this year. The collision was reported to Northumbria Police earlier this month.

A spokesperson for the police stated, “Just before 8:15 a.m. on November 2, we got a complaint of an accident between a young pedestrian and a car at the intersection of Newcastle Road and Laverock Hall Road in Blyth.”

The spokeswoman reported that emergency services responded and the girl was sent to the hospital with a probable pelvic fracture.

They further stated, “The driver stopped at the site and cooperated fully with authorities.”

Natalya, 23, and Kacey’s father Jason King, 35, are currently caring for Kacey and Lilly in their Newcastle home, while AJ is staying with his father.

Natalya stated, “Holly was on her way to her friend’s house to ask permission to go to school.” On one of the major roads she was crossing, a car struck her.

‘At the moment, she was alone. People gathered, but none of them knew her name or anything about her. It was only this young girl standing in the center of the road. I suppose that someone contacted the paramedics and the school.

Natalya stated that Holly’s school badge was visible, allowing people assisting her to contact the school. She stated that a man knocked on Michelle’s door to inform her about the incident, and when she arrived at the scene, there were teachers present.

She stated, “Holly was transported to the RVI.” Holly’s pelvis was fractured in three places, and fragments that separated from it pierced her intestines. They believed that her bladder had a small tear. During surgery, it was discovered that the bladder had entirely split in two.

Her X-ray revealed that her lungs were injured and that one of them had a shadow. She was experiencing internal bleeding, which required treatment.

We did not believe she would survive the surgery, and I cannot describe how that made me feel. When she emerged from surgery, the next issue awaited.

Holly underwent surgery and was induced in a coma. Natalya stated, ‘They believed that her lungs would be unable to work. They attempted to remove her from it after two days of her condition. When they attempted to discontinue her sedation, she coughed up blood after twenty minutes.

Natalya stated that medical professionals were able to remove the blood from Holly’s lungs, and the next day she was able to breathe on her own. She stated, “She has been improving and is on the road to recovery.”

She currently has two metal bars protruding from her pelvis that intersect in the middle to stabilize her pelvis. She has a significant scar. She will be permanently damaged, it will never go gone.’

Following the crash, Natalya, an administrator, accompanied Kacey and Lilly to the hospital to visit their sister.

She stated, “I had to put on a brave face for their sake.” All I could say as I stood over Holly’s bed was, “She’s just too small for this bed.”

She was simply too little for the bed, and it did not look right. It was dreadful that I had to explain to her sister what each tube was.

Natalya reported that Holly can speak and has been attempting to walk with the aid of a physical therapist. Holly’s family does not yet sure how long she will be hospitalized or whether she will be able to return home for Christmas.

Natalya stated, “When the medication begins to wear off, you can know she is in a great deal of agony. She is in such much pain that it is impossible for her to walk.

Natalya desires to assist Michelle in giving the four children the greatest Christmas possible. She stated that the mother of four is unable to work after her leg was amputated and has spent a great deal of money traveling to and from the hospital.

She created a Go Fund Me page earlier this week and has already raised £370.

Natalya stated, “I’m quite depressed; all I want is for the children to have a wonderful Christmas.” I want to bring them Christmas, but I don’t want Michelle to be stressed.

In January, Michelle’s leg was amputated just below the knee. She had numerous complications with her foot, and without amputation, she would have had sepsis. Michelle’s prosthesis is quite new, and she cannot walk very far. Her presence in Blyth is quite difficult.

“I know the worst is past for Holly, and that is a great comfort – that was extremely terrifying. Now, this is my primary concern so that they enjoy the nicest Christmas possible.’