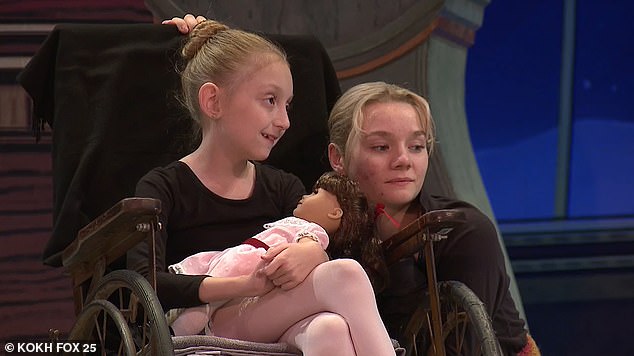 Thanks to the efforts of her mother and the local ballet company, a dying Oklahoma girl’s lifelong desire of performing in The Nutcracker has been realized.

Olivia Francis, aged nine, desired to perform in the holiday ballet. A year after beginning dance classes, however, the young girl was diagnosed with Friedreich’s ataxia, a rare, deadly neurological disorder that limits her ability to walk.

Despite Olivia’s devastating diagnosis, her mother Mary sought out to the Oklahoma City Ballet to see if they could assist make her daughter’s dream come true.

They were able to create a new part for Olivia, a girl named Marie who uses a vintage wheelchair, by collaborating.

Olivia Francis, 9, had always wanted to perform in the Nutcracker, but she was diagnosed with a rare neurological condition just one year after beginning dancing classes.

Marie, a girl using a vintage wheelchair, was constructed just for her by the ballet.

This year, the young girl’s hopes came true when the Oklahoma City Ballet included her in their holiday play.

Olivia reported that she cried when she learned she would finally be allowed to perform on stage with her fellow ballerinas.

According to OKC FOX, she first described her desire to perform in the renowned ballet in her first-grade journal.

The production firm informed Olivia on her birthday that she would be a part of the outstanding performance, making the surprise even more remarkable.

Then, on December 10, she made her dazzling ballet debut, and she will continue to shine on stage through December 18.

Clips of the performance show little Olivia participating in the dance with her arms, while other performers maneuver her wheelchair in time with the dancing.

During rehearsals, she was observed smoothly gliding around the stage with the other ballerinas while clutching a doll.

Olivia stated that establishing friends on the set of The Nutcracker was the highlight of her involvement in the production, despite the fact that she was little anxious about her performance.

Olivia told KOCO that the role of Clara’s sister Marie is not what she envisioned for the holiday show, but she expressed her gratitude anyway.

She stated, “Most of the time I’m just acting, but I can dance for one role.”

Racheal Nye, the school director for the Oklahoma City Ballet, remarked that when she dances, “everyone has their eyes on her.”

The nine-year-old child had a lifelong desire to perform in The Nutcracker. But following her diagnosis, she was forced to abandon her hopes of becoming a ballerina – until her mother contacted a local production firm.

Olivia, pictured on the left in her wheelchair, made her debut on December 10 and will continue to play the part through the 18th.

Olivia’s coworkers described her as a “pleasure to work with” after her theatrical debut. She is shown rocking a doll alongside her fellow ballerinas on the left.

Olivia had always desired to become a ballerina, but she was diagnosed just months after beginning her first dancing lessons. However, this has not prevented her from pursuing her aspirations of performing the Nutcracker on stage.

Everyone has been ‘motivated’ by Olivia’s presence on set and her determination, according to Nye.

She continued, ‘It’s quite a sight to see her on stage. It has motivated those around her.

With her condition, it seems unlikely that Olivia will ever be able to walk. She was diagnosed with Friedreich’s ataxia in 2020, and there is presently no cure.

“It’s very amazing,” she exclaimed, disclosing that her daughter had informed her, “Mom, they’re trying to make me famous.”

Olivia may have the opportunity to act in the Nutcracker again, as her coworkers described her as a “delight to work with” after her incredible performance on stage.

Ryan Jolicoeur-Nye, artistic director of the OKC Ballet, stated, ‘She has been an absolute pleasure to collaborate with. She is quite humorous. She learns quickly.

I believe she could have a career performing the Nutcracker more than once.

She was provided a wheelchair with a Victorian design to match the ambience of the show.

Olivia is observed performing in The Nutcracker with the assistance of her peers.

In 2020, nine-year-old Olivia received her diagnosis. When asked what her dream was in first grade, she wrote that she wanted to appear in The Nutcracker.

Mary, Olivia’s mother, was moved to tears by the sight of her daughter dancing on stage.

What is the cause of Friedrich’s ataxia? The uncommon, fatal neurological illness that affects 50,000 Americans.

Only 50,000 persons in the United States are diagnosed with Friedrich’s ataxia, a rare, fatal neurological disorder.

It is caused by a mutation in the FXN gene, which contains the genetic coding for the frataxin protein. The condition will occur in individuals who inherit two faulty copies of the gene, one from each parent.

The progression rate differs across individuals.

Within 10 to 20 years of the onset of the initial symptoms, the person is typically confined to a wheelchair. In the final stages of a disease, a person may become fully debilitated.

Ataxia of Friedreich can reduce life expectancy, but heart disease is the leading cause of death.

However, some individuals with less severe FA symptoms live into their sixties or beyond.

The illness is incurable, and therapies are ineffective.