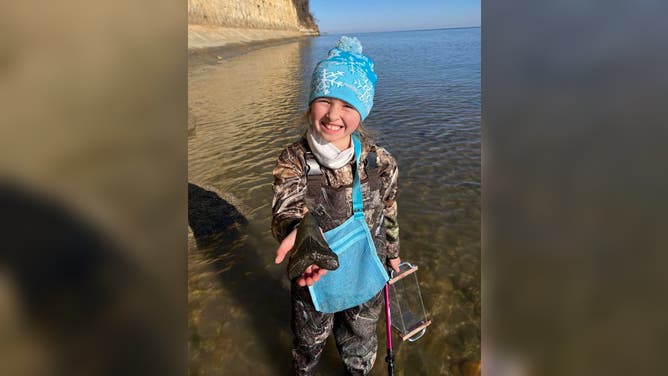 Molly Sampson, a nine-year-old fossil hunter, discovered a Megalodon tooth while scouring a beach in Calvert County, Maryland, on the Chesapeake Bay.

Molly was wading through the lake on Christmas morning while wearing camo overalls and a baby blue winter hat when she discovered the teeth of a long-extinct shark species.

Megaladon existed between 2.6 and 23 million years ago and was the largest shark and fish to have ever lived.

The tooth discovered by young Molly was the size of her hand.

The paleontologists at the Calvert Marine Museum in southern Maryland confirmed Molly’s discovery of the fossil.

The Calvert Marine Museum posted on its Facebook page on Friday, “Molly was thrilled to share her incredible discovery with our paleontology department last week,”

Fossil hunters frequent the southern Maryland beaches of Calvert County. Particularly the beach at Calvert Cliffs State Park has been the site of numerous finds.