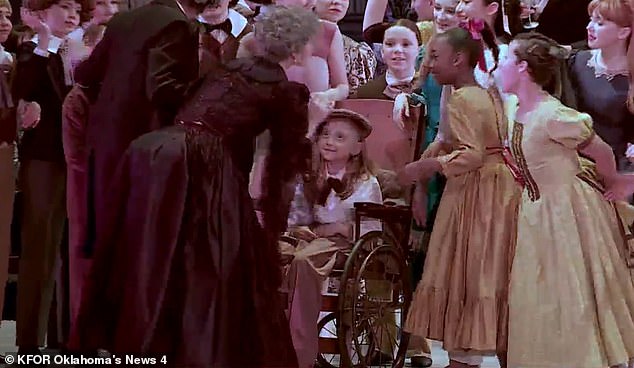 Thanks to her mother’s dedication and the efforts of the local ballet, a dying Oklahoma girl’s longtime desire of performing in the Nutcracker has come true.

Nine-year-old Olivia Francis has long wished to perform in the Christmas ballet. But just a year after beginning dancing classes, the little girl was given a diagnosis of Friedreich’s ataxia, a rare, fatal neurological illness that impairs walking.

Mary, the mother of Olivia, however, wanted her daughter’s wish to come true and contacted the Oklahoma City Ballet to see if it could.

Together, they were able to develop a brand-new character, Marie, who utilizes a vintage wheelchair, just for Olivia.

According to OKC FOX, Olivia said that she sobbed when she learned that she will soon be able to perform on stage with her fellow ballerinas, fulfilling a wish she had expressed in her first-grade journal.

On December 10, she made her ballet debut, and until December 18, she will continue to perform on stage.

Olivia admitted to KOCO that playing Clara’s sister was not how she had seen herself in the Christmas play, but she added, “I’m extremely appreciative.”

“Most of the time I’m simply acting,” she said, “but there’s one bit when I can dance.”

Racheal Nye, the school director for the Oklahoma City Ballet, said that “everyone just has their eyes on her” when she finally stands up to dance.

She said, “It’s definitely amazing to watch her on stage.” “Everyone around her has been influenced by it.”

Mary’s eyes began to well up with tears at the sight.