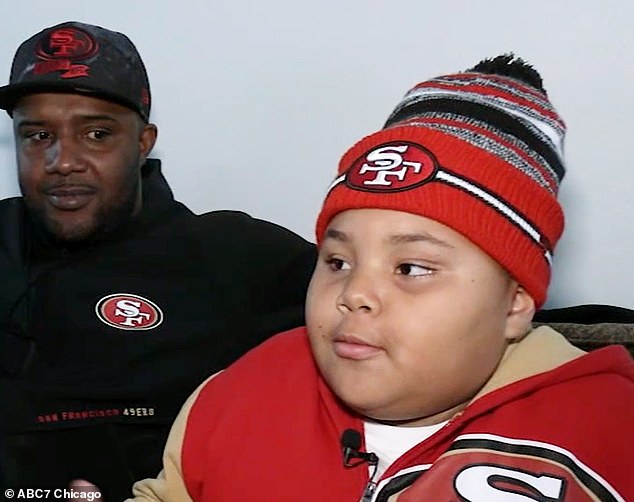 A video of an eight-year-old Californian ‘feeling the vibe’ during his elementary school’s winter musical has gone viral.

Jaden Williams, age 8, and his phenomenal dance moves have been viewed more than twenty million times as he performed with classmates.

In an interview with a local publication, Jaden appeared subdued when discussing the video, a dramatic contrast to his flamboyant concert demeanor. However, there was a valid explanation behind that.

‘I simply started dancing,’ Jaden added. I was experiencing the vibe.

Since being shared to Instagram a week ago, the elementary school student’s video has been liked by more than 692,000 people.

In the video, Jaden can be seen embarrassing his classmates by sticking his tongue out and performing what appears to be a sequence of TikTok-inspired dancing routines.

The mother of a student who was blown away by Jaden’s remarkable performance tweeted his viral video right before school went out for the holiday vacation.

The woman who uploaded the video tagged the San Francisco 49ers, whose emblem appears on Jaden’s clothing, and hash-tagged the video ‘dancing machine.’

Kirk Williams, Jaden’s father, stated, “His classmate’s mother put it on Instagram, where it gained traction, and she tagged my wife.”

Kirk stated, “From that point on, it began to become viral.”

Jaden told ABC 7 that he was really ecstatic about the concert and could not wait to show his friends, family, and loved ones what he had created.

Jaden remarked of the concert, “I was very happy to participate” “I would ask my music teacher, Miss Harrington, “When will the concert begin?” I was ecstatic.

His happiness has spread to the millions of online video viewers.

On the original video, actor Jermaine Crawford stated, “Jaden is a star.”

‘Jaden is me. One commenter stated, “He thought we should add some flair to this.”

“When he grows up, he’ll be the uncle that lights the grill,” said another.

The parents of Jaden assert that he has always had a radiant presence, and they are ecstatic that the world is finally able to see what they have always known.

Kirk stated, “He’s been like that ever since he started walking, and we’ve had a lot of parties here at the house with plenty of music playing.”

The father stated, “Everywhere we go, including friends’ homes, parties, and weddings, he is always the center of attention.”

Jaden’s dance moves did, however, appear to have attracted some critics who accused him of being “disrespectful” and “taking the stage” from his peers.

His family could not disagree more passionately with this statement.

Jaden’s mother Yanira Williams stated, “I’ve read the comments, and those who say Jaden is selfish or disrespectful to his peers do not know Jaden.”

Every day at school, he embraces all of his classmates since he has a loving and joyful soul. His personality is large, which is an understatement comparable to that of his father; Kirk! I wish you all joyful holidays and love!

On the eight-year-Instagram old’s video, the San Francisco 49ers football team sent the following message of approval: “Ok Jaden!! We see you!’

Jaden’s family members claim he wishes to meet his favorite 49ers, Nick Bosa and Deebo Samuel, when he becomes a professional football player.