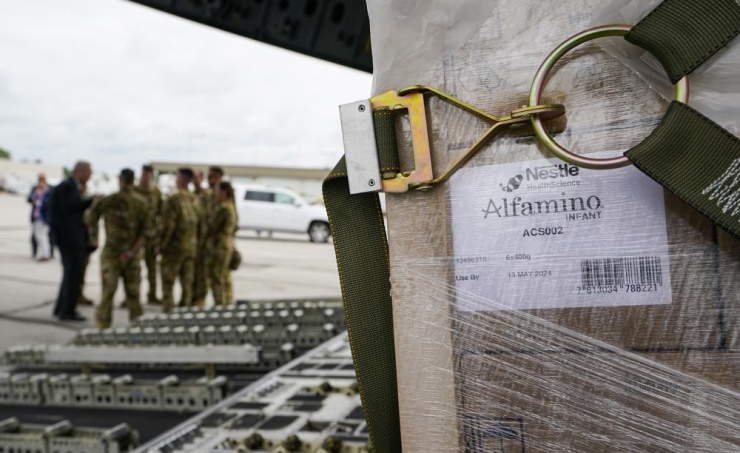 A military plane carrying enough specialty infant formula for more than half a million baby bottles arrived Sunday in Indianapolis, the first of several flights expected from Europe aimed at relieving a shortage that has sent parents scrambling to find enough to feed their children.

President Joe Biden authorized the use of Air Force planes for the effort, dubbed “Operation Fly Formula,” because no commercial flights were available.

Agriculture Secretary Tom Vilsack was in Indianapolis to greet the arrival of the first shipment.

The flights are intended to provide “some incremental relief in the coming days” as the government works on a more lasting response to the shortage, Brian Deese, director of the White House National Economic Council, said Sunday.

Deese told CNN’s “State of the Union” that Sunday’s flight brought 15% of the specialty medical grade formula needed in the U.S., and because of various actions by the government, people should see “more formula in stores starting as early as this week.”

Longer term, he said, the U.S. needs more formula providers “so that no individual company has this much control over supply chains.”

Later Sunday, the White House announced the first two Defense Production Act authorizations for infant formula, both coming from the Department of Health and Human Services.

The manufacturer Abbott Nutrition can now receive priority orders of raw materials like sugar and corn syrup for infant formula, which the White House said will allow the manufacturer to increase production quickly by one-third.

Reckitt, owner of Mead-Johnson, can now receive priority orders of consumables like filters and other single-use products necessary to generate certain oils needed to produce infant formula, the White House said, which will allow Reckitt facilities to operate at maximum capacity.