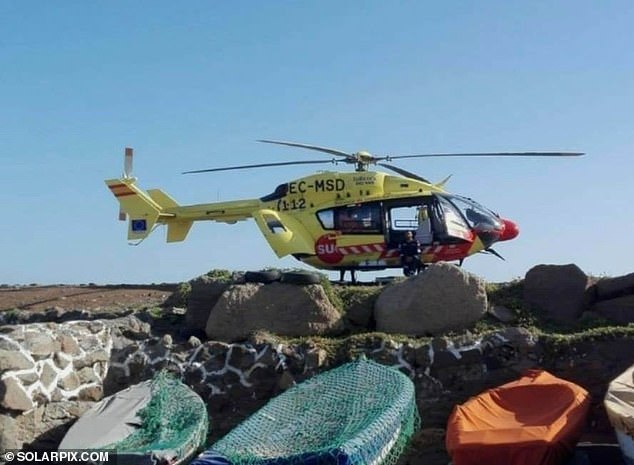 A British scuba diver has passed away on the vacation island of Lanzarote.

The 60-year-old reportedly suffered a heart arrest on Playa Flamingo in the island’s south.

The tragedy occurred on Monday about noon.

He was described as a “foreigner” at the time, but authorities did not establish his nationality until this morning.

It is believed that a lifeguard attempted to save the unidentified British man while he was in trouble but was unable to save his life.

Enrique Espinosa, manager of the Security and Emergency Consortium of Lanzarote, stated, ‘He had all the necessary permissions to dive, but diving is a high-risk activity, and anything that goes wrong might be fatal.

After his arrival, he suffered a heart attack, and attempts to revive him were futile.

It is believed that an autopsy has already been performed, however autopsy results are rarely made public in Spain and are instead given to the investigating magistrate in charge of the death investigation.

According to police sources, the British guy had “health concerns.”

It was unclear whether he resided in Spain or was on vacation in Lanzarote, as well as whether he had been diving alone or with a group.

In January of 2018, a British senior citizen drowned on Playa Flamingo, a beautiful beach with calm waves and good sand.

As a result of the richness of fish, the location is favored by both expert and novice divers.

In 2017, three British divers perished in the Canary Islands.

Two, including John Walker, 54, a former 2 Para soldier from Consett, County Durham, were visiting or preparing to visit the Atlantic Museum off Lanzarote.

At the time, the third victim was identified as 44-year-old fitness enthusiast Justine Barringer, who died after getting into difficulty off Veneguera Beach in Gran Canaria.

In February of 2019, a British man died while diving off the coast of Tenerife, where he and his wife Lesley were celebrating their 32nd wedding anniversary.

Andrew Littler, from Coalville, Leicester, was pronounced dead after the alarm was raised when he went into cardiac arrest on a pier in the tranquil tourist village of Abades in the south-east of the island. Attempts to revive him were futile.

Friends created a GoFundMe page to help repatriate the transporter driver’s body after learning of the tragedy.

Between November 4 and November 10, this month, five people drowned off the Canary Islands in just six days.