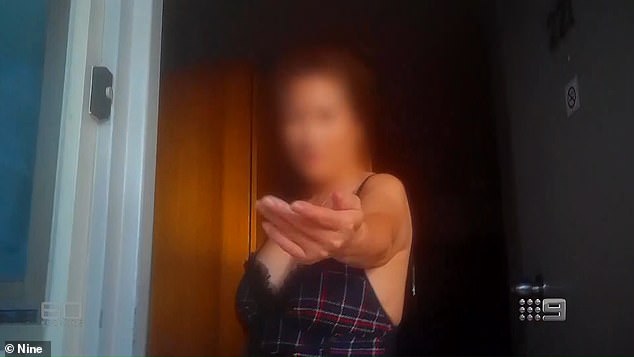 Vulnerable sex workers are being forced to service customers day and night out of squalid hotel rooms as international sex traffickers operate with impunity in Australia by abusing the nation’s weak immigration requirements.

The young women are transported to Australia via so-called visa farms with no upfront fees, which are operated by immigration agents working for Asian human trafficking networks.

An undercover investigation by 60 Minutes revealed that the majority of women are deceived by recruiters about the work they would be performing in Australia, with the promise of earning large sums of money.

However, because they speak little English, they are at the mercy of the gangsters who grab their passports and demand they reimburse the money used to purchase their plane tickets and visas.

The services of the young woman are openly marketed online.

A ‘customer’ for the Nine program who called this number in the North Queensland city of Townsville immediately received a text message advertising the rates for a half-hour and an hour of sex, along with the hotel location and room number.

When the he arrived the man was met by a scantily clad Asian woman who quoted the rates for sexual services.

The Queensland Detective Inspector of Major Crimes, Brad Phelps, stated that the women were “transported like cattle around the country into different motels” and that this was occurring all along the east coast of Australia.

He claimed they were paid a pittance, or perhaps nothing at all, while the sex trafficking kingpins, thought to be Chinese nationals, made millions.

He stated, “They are treated as the lowest of the low, and tremendous profits are being made from their mistreatment.”

One South Korean lady named Karen (not her real name) only know two English words when she started working in illegal brothels in 2014 – ‘Hi and hello.’

Before she departed, she was promised a substantial salary and favorable working conditions, but when she arrived in Melbourne, she was met with a harsh reality.

Her pimp took her passport and informed her that it would not be restored until her “debt” was paid.

Detective Superintendent Jayne Crossling, who supervises the AFP’s human trafficking division, stated that a large number of women are recruited fraudulently in their home country.

She stated, “They are not necessarily aware that they are entering the sex industry.”

Or, if they knew prior to entering the sex industry, and when they arrive in Australia, they realize they are effectively in a debt bondage scenario, or that the unreasonableness of what they are being asked to do is ludicrous.

They are being asked to deliver more services than they previously agreed to.

One was instructed to apply for a refugee visa, but without the prospect of being granted one.

The objective was to obtain a visa that would allow them to work for three years while their primary application was being processed.

Another was advised that obtaining a student visa would exempt them from attending classes.

You are not required to attend school. You may visit once per week. It makes no difference whether you go or not,’ the agent assured them.

There are literally visa schools that have attendance rates comparable to such schools.

He calculated that at least 30,000 foreigners were working under false pretenses in Australia.

This number would include not only sex workers, but also farm laborers and other professionals.