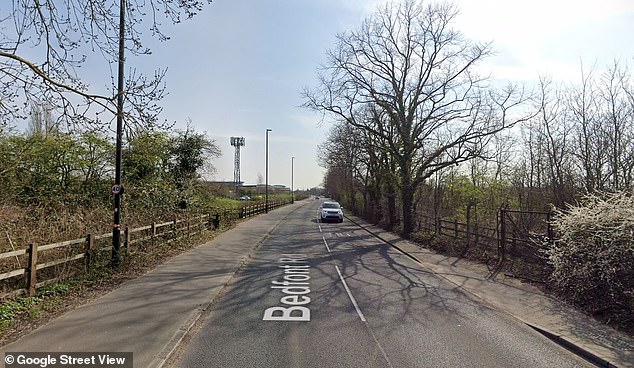 A woman riding her mobility scooter in West London was struck and killed by a car mere minutes before Christmas Day.

At approximately 11:50 p.m. on Christmas Eve, the 58-year-old woman was struck along Bedfont Road.

Police and paramedics hurried to the location, where they discovered the injured woman.

Despite the efforts of the paramedics, she succumbed to her injuries and died.

At approximately 11.50 p.m. on Christmas Eve, a 58-year-old woman was struck by a car on Bedfont Road in Hounslow (pictured) and tragically died from her injuries.

According to police, her family has been notified and a specialized officer has been sent to assist them.

The police report that the car’s driver promptly stopped at the scene of the crash and cooperated them with their investigation. No arrests have been made, and the investigation continues.

A representative for the Metropolitan Police Department stated, “Detectives are seeking witnesses following a tragic collision in Hounslow.”

“Police were dispatched to Bedfont Road at approximately 23:50 on Saturday, December 24 in response to complaints of a collision between a car and a mobility scooter.

“The car’s driver quickly stopped at the scene of the accident and cooperated authorities in their investigation.” No arrests have been made, and the investigation continues.’

Roads and Transport Policing Command detectives are seeking any witnesses or drivers in the vicinity at the time of the incident. Officers would also like to hear from anyone with CCTV or dashcam footage of the collision.

Anyone with information is invited to contact the Serious Collision Investigation Unit at 020 8543 5157 or via 101 with the reference number CAD 6753/24Dec.

The incident occurred during the same Christmas weekend as several tragic car accidents.

A 22-year-old woman was killed on Christmas Eve after being struck by a police vehicle.

Rachael Louise Moore was struck and killed at 8:10 p.m. in the Kensington neighborhood of Liverpool.

Merseyside Police have requested that anyone who witnessed the collision or captured anything on CCTV or dashcam contact the Serious Collision Investigation Unit on (0151) 777 5747, by email at sciu@merseyside.police.uk, or via @MerPolCC on Twitter or ‘Merseyside Police Contact Centre’ on Facebook, with the reference number 857 of Saturday, December 24.

Rachael Louise Moore (pictured) was tragically killed after being struck at 8:10 p.m. in the Kensington neighborhood of Liverpool.

This morning’s early hours witnessed the tragic death of a 22-year-old female.

Since then, a 29-year-old male has been detained on suspicion of causing death while driving recklessly and is in detention.

Patrolling officers in a marked vehicle attempted to stop one of the vehicles involved in the deadly collision on Hendon Road in Edgware, north London, before to the collision, but the vehicle fled.

The officers opted not to pursue the vehicle, but shortly thereafter it collided with another automobile and then struck a lamppost on the Brent Cross Flyover, further along the same road.

Call 101 or tweet @MetCC with the reference number CAD933/25Dec if you have any information that could assist the police, especially dash cam footage from drivers.

On Friday, another woman was murdered in a tragic crash involving an unmarked police vehicle.

Heather Smedley, a 53-year-old mother of three, was brought to a hospital in Oldham, Greater Manchester, following the “brief pursuit,” but died from her injuries.

53-year-old Heather Smedley was killed after she collided with a police car pursuing a suspected stolen vehicle through the streets of Oldham.