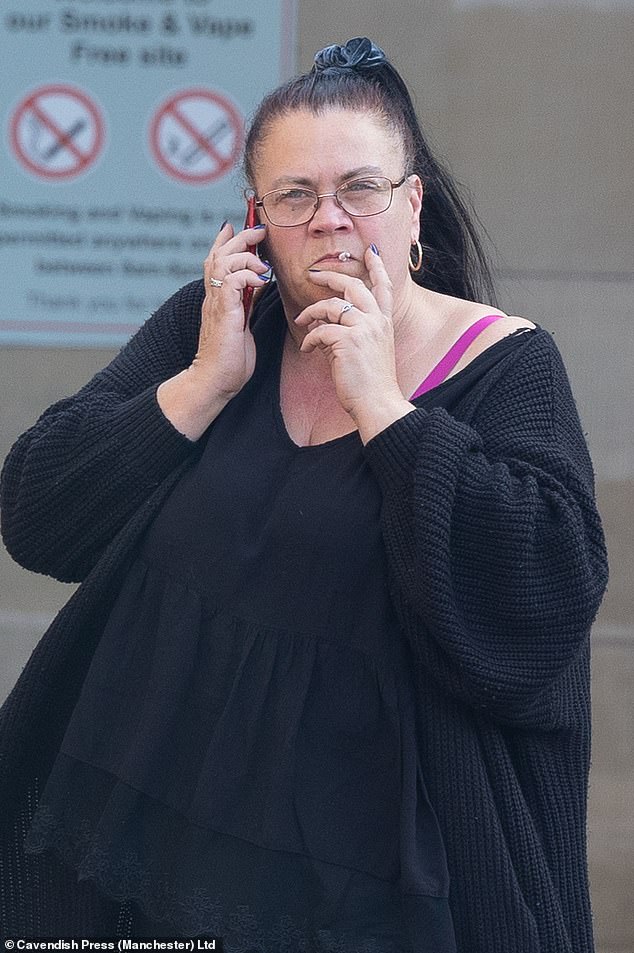 A gambling addict who stole more than a thousand luxury teddy bears from her employer and sold them online at deep discounts wept as she was sentenced to one year in prison.

Lisa Noriega, 51, stole a collection of rare Charlie Bears, each of which can cost up to $100, while working at a crafts center and sold them on eBay using the account of her estranged husband.

By the time employees at the Cheshire Bear Company near Nantwich discovered the crimes, treasured toys worth over £100,000 had vanished.

The losses, which included a Star Wars bear range, were so bad that the company’s CEO, Jon Richards, who spent a year without a paycheck while keeping Noriega on full pay, was forced to close one of the company’s locations.

Noriega of Tamworth, Staffordshire, claimed she became addicted to online gambling after she was barred from visiting her daughter at college by Covid restrictions.

Judge Alistair MacDonald said Noriega during her sentencing at Chester Crown Court on Friday morning, ‘You must have known your acts caused substantial harm to your boss and your other three employees.

Mr. Richards opted to trust you and keep you on the job during the lockdown with full pay, and this is how you repaid him.

“Why did you use your husband’s account to sell these bears? Simply to obtain a cheap thrill from online gambling without wagering anything of real value.

Lisa Noriega, 51, shown outside Chester Crown Court, stole from the Cheshire Bear Company a collection of rare Charlie Bears valued at around £100 each.

The Cheshire Bear Company at the Cheshire craft center Dagfields. Due to the losses, the company was compelled to close one of its other branches.

During a time when her coworkers were on furlough, Noriega ran a mail-order operation for her boss single-handedly as she helped herself to the collection.

Before joining Cheshire Bear in 2019, she had worked for the company’s owner, Mr. Richards, for 14 years and for one of his other businesses.

The prosecutor, Paul Wood, stated, “When the pandemic struck, the defendant informed Mr. Richards that she could not take furlough money and would prefer to work throughout.”

She stated that she could manage the company’s mail-order activity across all three of their locations. Mr. Richards permitted this, and she continued to receive full compensation while the other three employees were on furlough.

During her 18-month employment, the defendant stole £101,670 worth of rare and limited edition Charlie Bears from the company’s three locations, each of which she had unfettered access to.

“One day, Mr. Richards was alerted to an eBay website that a coworker had discovered online,”

The colleague questioned him if he had observed that the page was selling the exact same bears that Mr. Richards had lately discovered were missing from stock counts.

Among the objects in question were some rare bears, such as the Star Wars Charlie bears.

Mr. Richards believed that there was only one individual with access to these rare bears, and that was the defendant.

‘Soon after this realization in August 2021, he questioned the defendant as to whether or not she recognized the eBay account that was selling the bears.

She responded that she did not recognize the account, at which point Mr. Richards asked her if she recognized the residence to which the account was attached and shown a Google Street View image. She claimed it was her husband’s home, but she actually shares ownership.

Mr. Richards asked her once again if she managed the account, at which point she pleaded guilt.

She also admitted to stealing mail and packaging materials in order to sell the bears online.

When questioned why she did it, the defendant stated that she had a gambling addiction, which prompted her to commit the crime.

She was neither an accountant nor a bookkeeper, but a great deal of confidence was placed in her.

The court heard that the thefts had a significant impact on the family-owned business, which had to rely on loans to continue, while Mr. Richards had to go without a wage for more than a year.

He stated that his relationship has been strained as a result of the event.

The company retained Noriega on full pay during lockdown despite her request to be furloughed, and she repaid the corporation by stealing over £100,000 worth of inventory.

Mr. Richards and other coworkers had enormous faith in the defendant, and her position gave her access to the whole inventory.

Mr. Richards remarked, “During the entire lockdown, she knew exactly what to do while her coworkers struggled.”

The market was suddenly swamped with these rare and limited-edition bears, which were sold at a discount. Long-term, this will surely harm our business.

Noriega did not have any prior convictions. Her attorney Oliver King stated, “We must consider the challenging personal circumstances she was suffering at the time.”

Her long-term boyfriend, with whom she co-owned the house, had lately left her, and her sole child had just left for college.

This left her home alone for extended times, and the pandemic prevented her from visiting her daughter. This caused her to become quite lonely and alone.

‘During this time, she first found internet gambling. She began by placing tiny wagers, but over time it became a habit and a method for her to feel slightly better about her circumstances.

Every victory gave her a thrill. However, the habit grew, and she was forced to find a means to fund it.

The court listened Noriega has sought assistance from the Salvation Army and enrolled in the GameStop program for gambling addicts.

‘At the time, she worked for the Cheshire Bear firm and saw the theft as an opportunity to make money by advertising and selling the bears she was responsible for.

“As indicated by her age and lack of previous convictions, her acts were utterly out of character.

She feels profound regret and remorse for her acts. She informed me that she considered selling her home to repay Mr. Richards, but was unable to do so because she co-owned the property with her ex-husband.

Mr. King continued, “She has made an effort to regain control of her life.” She sought assistance from the Salvation Army and enrolled in the GameStop program to combat her gambling addiction. Her family also attempts to prevent her from using applications.

This woman has made every effort to make amends.

In his sentencing remarks, Judge MacDonald stated, “Theft from an employer is always a serious offense, but the amount you stole in this case makes it even more so.”

He said, “This was not a one-time theft; it was a pattern of ongoing stealing over a period of 18 months, and you were only able to commit it because Mr. Richards trusted you.” How is he going to be able to trust anyone in the future?’