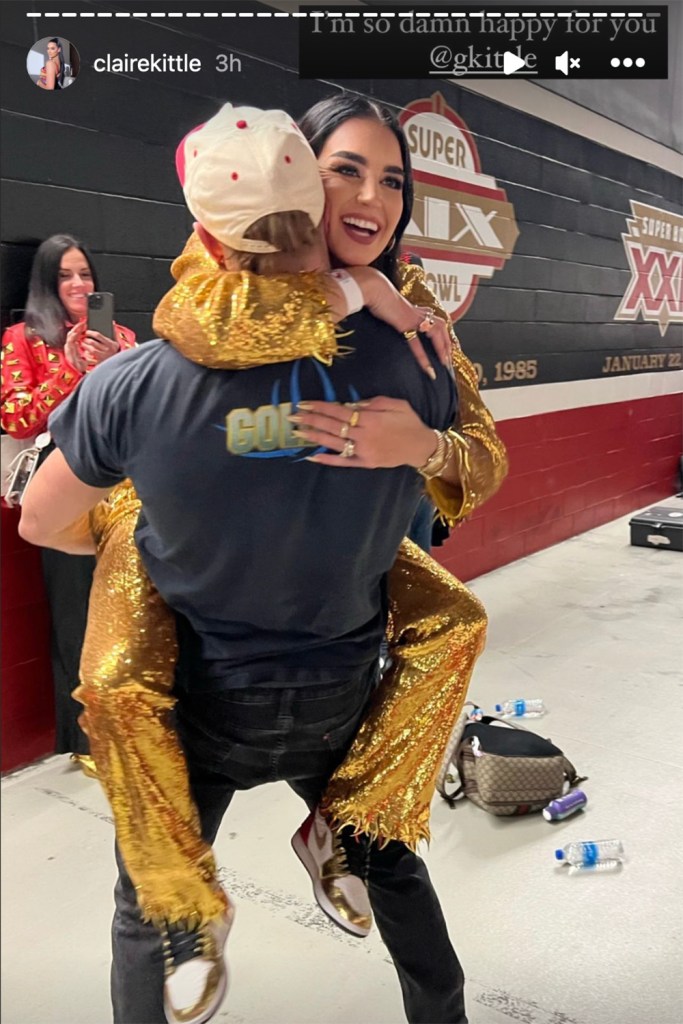 Sunday, the WAGs of the 49ers had a great time celebrating their team’s Divisional Round victory against the Cowboys by a score of 19-12.

Claire Kittle, the wife of George Kittle, and Olivia Culpo, the girlfriend of Christian McCaffrey, presented a touching homage to the running back after the game.

Claire, who was wearing a glittering gold top and feathered trousers, leaped into Kittle’s arms as they celebrated in the passageways behind Levi’s Stadium. Kittle’s red and gold Nike cleats complemented her red and gold Nike sneakers.

Claire posted on her Instagram Story over a photo of the couple beaming and hugging, “I’m so happy for you @gkittle.”

“See you with this energy in Philadelphia, @gkittle,” she said in a separate post.

On January 22, 2023, San Francisco 49ers tight end George Kittle and his wife Claire Kittle had a moment after advancing to the NFC championship game.

Culpo was photographed wearing an all-black attire in a private suite where she was celebrating with friends. The model and actress posted a series of videos cheering for McCaffrey, including a tribute to the star running back following the victory.

Culpo commented over a video of the field following Sunday’s game, “When your best friend is living his dream.” “@christianmccaffrey I adore you so much.”

Olivia Culpo shared a tribute to her boyfriend, 49ers running back Christian McCaffrey, on January 23, 2023, after they progressed to the NFC championship game.

Kittle’s 30-yard reception while juggling with 5:30 remaining in the third quarter set the tone for San Francisco.

The Eagles will face the 49ers in the NFC Championship game next Sunday in Philadelphia, a year after the Rams defeated the Niners in the same round.