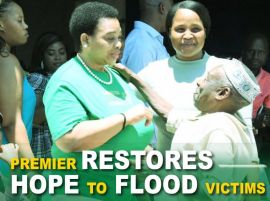 Over 400 families from different mass care shelters were rejoicing and cheering as they packed up their things to move to their new homes, where they will spend Christmas.

Nomusa Dube-Ncube, Premier of KwaZulu-Natal, aided flood victims from the Tshelimnyama shelter in packing and loading their things onto government-provided vehicles.

To present, 96 of the 135 mass care shelters that have been hosting families since the April floods have been permanently shuttered.

Dube-Ncube stated that over the next few of days, the provincial government would enable the migration of all families to guarantee that there will be no flood victims staying in mass care shelters in KwaZulu-Natal on Christmas.

“We have mobilised all available resources and are undertaking every effort to ensure that we rebuild and rehouse flood victims. We thank all our citizens for their patience because every day we are seized with the task of ensuring that our province fully recovers from the flood disasters,” Dube-Ncube said.

The Premier recognised that their ability to satisfy all the requirements at once has frequently been strained and at times, “we have had to attend to lifesaving and critical areas first”.

She underlined that the administration is working relentlessly to expedite the resettlement of all flood victims in order to alleviate all of the anguish and worry.

“We have made significant progress if you consider that over 14 449 people were displaced after the flood disasters with 4 983 people left homeless. Seven months later, we are very close to closing down all mass care shelters.

“We made the commitment to the people of KwaZulu-Natal that as their caring government we will do everything in our power to ensure that before Christmas all flood victims move out of mass care shelters and are housed in decent accommodation.

“From the agony of being deprived of privacy and uncertainty, we have practically restored the dignity of our flood victims became families will now be able to regroup and plot their future in a safe and habitable place,” Dube-Ncube said.

The Premier also expresses heartfelt gratitude to all communities for their patience, calm, and understanding while the provincial administration works relentlessly to rehabilitate the province.

»400 families of the KZN flood victims move to new houses«