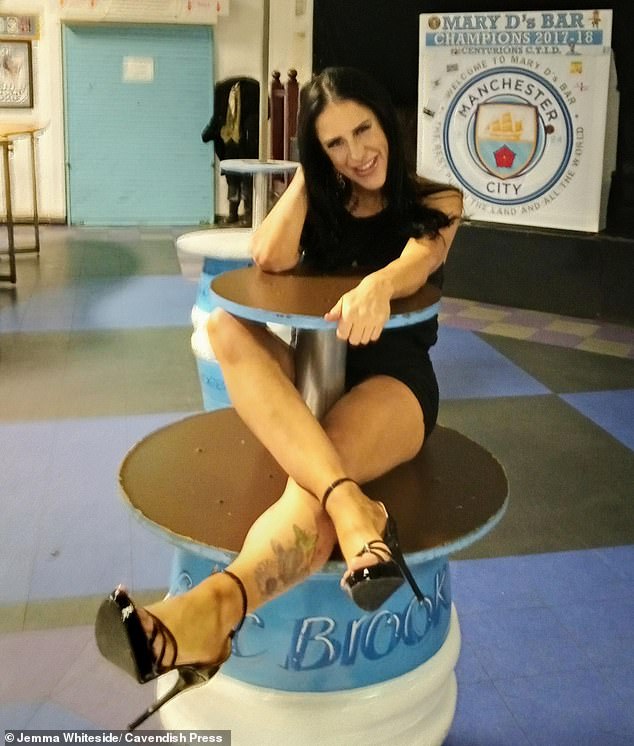 A female Manchester City supporter who became intoxicated and grabbed a male Everton supporter during a Premier League football match avoided jail time despite the victim’s request that women sex offenders be treated similarly to males.

In February, 40-year-old Jemma Whiteside assaulted the man shortly before kickoff and declared, “I’m going to f*** him later, and I don’t even know his name.”

The mother of six rejected the charges, stating that she “wouldn’t even do this to my boyfriend in public.” She said that as a’staunch city supporter,’ she could not imagine herself making such a statement to a Scouser.

Whitehouse was found guilty of sexual assault last month and was facing up to ten years in prison for the crime. She was sentenced to a nine-month community order, 15 days of rehabilitative activity, a fine, court fees, and victim restitution last week.

Whiteside (left) grabbed the man’s genitalia and twerked against his shoulder prior to the February game, stating, “I’m going to f*** him later, I don’t even know his name.”

Whiteside, a resident of Worsley, Greater Manchester, was at Goodison Park on February 26 to watch City defeat Everton 1-0.

The victim, who is in his forties, reported the event to the police and stated that he was “shocked” to have been fondled.

PC Mark McGinty, who detained Whiteside in the stands, told the court that she was “very intoxicated” based on her behavior throughout the game.

Mr. McGinty recalled, “She was flailing her arms crazily, leaning over the barrier and trying to grasp those below while shouting at them and toward the field.”

Her speech was extremely slurred, she was wobbly on her feet, and her eyes were bloodshot. I had the impression that she was quite intoxicated.

The court heard that Whiteside was overheard stating that she “loved Scouse men” in the officer’s statement.

Later, when asked about the event, Whiteside responded, “As a die-hard city fan, I cannot imagine myself saying that.”

I would never do such a thing in public to my lover. Any Man City fan would agree fully if asked. That is not a course of action I would take.

“He has taken offense with me; he dislikes me.” I am both a respectable mother and City supporter. I would not act in a manner that would hinder my ability to watch Manchester City.”

Whitehouse stated at the hearing, “Had I been walking by, I might have bumped against him.” It was a football game and the venue was full, so it is easy to accidentally bump into someone.’

She also denied that she was intending to “f**k him later” and added, “I never said that.”

“I have never before made such a statement in my life. I am the mother of six offspring. When I am not caring for my children, the only activity I engage in is football.

Whiteside, whose son is in the final year of a scholarship at a Premiership team and whose daughter is through trials at Liverpool FC, was convicted of sexual assault last month and faces up to ten years in prison.

However, she was sentenced to a nine-month community order and 15 days of rehabilitation activities last week.

A judge ordered her to pay the victim £400 in restitution and fined her an additional £200 plus £295 in court costs, stating that “drunk individuals can and frequently do things that are out of character.”

District Judge James Clarke found her guilty of sexual assault and stated that the victim experienced “quite an unusual and unexpected form of interaction.”

In his initial statement, he said that he was touched on the buttocks, testicles, and penis. In his testimony, he simply mentioned testicles, although the entire intimate region is included. His response was one of disbelief.

Clearly, for the victim to misread or manufacture the statement “I shall have him later, and I don’t even know his name” is a peculiar thing to do.

“Under the influence of alcohol, individuals can and frequently do things that are wildly out of character. I am certain that the woman had had alcohol during the afternoon.

She was a woman in great spirits who was hustled by her companions while enjoying her final sips of vodka.

According to my assessment, the complainant provided a credible story. It was not something susceptible to misunderstanding or error. I am not convinced that is a fabrication on his part.

“The defendant was a prankster, and this was a stunt that went horribly wrong while he was drunk and probably showing off to his companions.”

Senior Crown Prosecutor Mike O’Kane of CPS Mersey Cheshire stated after the case, ‘This man was subjected to a completely unprovoked and unanticipated sexual attack by Ms Whiteside.

The incident caused the victim both distress and embarrassment. In his victim impact statement, which was given during the sentencing hearing, he added, “It should not matter if the assault was committed by a man or a woman; it should be addressed equally.”

The Crown Prosecution Service echoes this sentiment. Men do experience sexual assaults and are entitled to legal protection.

The CPS strives to apply the law impartially, regardless of the suspect’s or victim’s gender, and to vigorously prosecute crimes of this nature.

The victim in this case was compelled to attend trial and testify because Ms. Whiteside refused to acknowledge her responsibility.