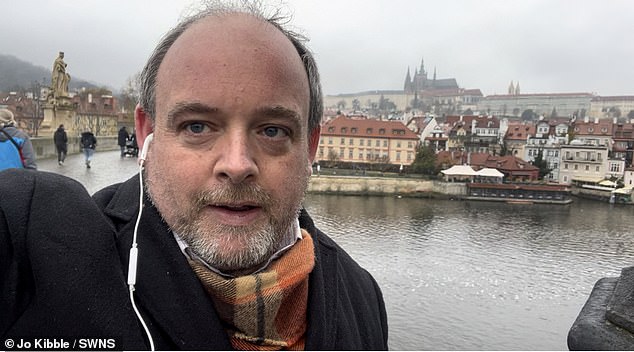 Monday at 11:58 p.m., 40-year-old Jo Kibble left London for Eijsden, in the extreme south of the Netherlands, to begin his mission of seeing as many countries as possible in a single day.

It provided him with convenient access to as many nations as possible, and he utilized buses, trains, trams, coaches, and rental bicycles.

He visited Belgium, Luxembourg, Germany, France, Switzerland, Liechtenstein, Austria, and Slovakia before concluding his journey in Breclav, Czech Republic, on Tuesday at 11:25 p.m.

After doing a similar journey eight months prior, he challenged himself to see how far he could travel from London in 24 hours using just trains.

Jo, who resides in Charlton, south-east London, and manages the cabinet office for Ealing Council, stated, ‘It was an amazing experience.

I had wanted to see eleven countries, but a train breakdown in Alsace, France, prevented me from visiting Hungary.

“During the course of the trip, I took eight trains, five buses, a coach, a tram, and a rental bicycle.

“According to my standards, I couldn’t simply ride a train through a country to cross it off my list; I had to arrive and exit on different vehicles, so I had to switch.

‘The comfort ranged from an extremely cramped, overloaded 1 a.m. bus from Liege to Luxembourg to a first-class express across the breathtaking Austrian Alps.

The tour also includes a stop in the clinically clean capital of Liechtenstein and a dilapidated station in the suburbs of Bratislava.

At 11:58 p.m. on Monday night, Jo began his journey from the little village of Eijsden in the southern Netherlands, departing for Belgium on the final train of the day.

Less than an hour after arriving in Liège, Belgium, he boarded a 1am Flixbus coach to Luxembourg, where he rented a Vel’OH! bicycle from the park and ride where the coach arrived.

At 4 a.m., he boarded an express bus to Saarbrücken, Germany, before transferring to a tram at 5:40 a.m. to reach Sarreguemines, France.

Jo then boarded a train to Strasbourg at 6:13 a.m., followed by a train to Basel, Switzerland at 7:51 a.m., but this train was terminated at the border owing to a technical fault.

The fact that he had to catch the next train to Basel meant he missed his intended connection to Hungary, shortening his journey by a whole country.

Jo subsequently took a bus to Bratislava-Hlavná at 9:38 p.m. and a train to his final destination at 10:06 p.m.

Jo landed at Breclav in the south-east of the Czech Republic at 11:25 p.m., having traversed 10 countries in a total of 23 hours and 27 minutes.

He stated, “I’m glad I accepted this task.

It’s fantastic to realize that things you spend a great deal of time planning on paper may actually work in practice.

“Fortunately, the last train to Prague had a sleeper car, so after hopping off at a very cold Breclav at 11:25 p.m., I was able to hop back on, go to sleep, and wake up in the Czech capital the next morning.

I have a few days left in the Czech Republic and then I’ll be wandering back home.

“Coming up one short of the number of countries I believe it is possible to see in 24 hours presents an opportunity for future difficulty.”