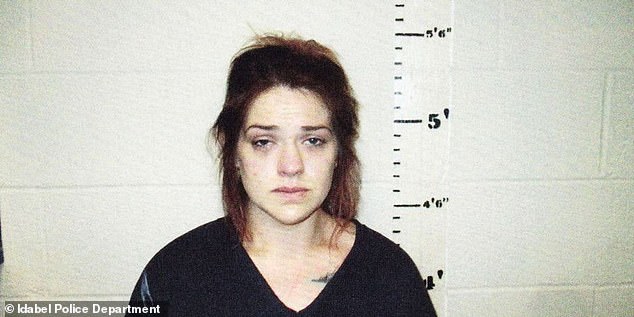 Yesterday, an infertile womb raider was condemned to death for stabbing a very pregnant woman and crushing her skull before ripping her unborn child from her womb and killing them both.

According to TXK Today, Taylor Rene Parker, 29, was given the death penalty after a jury of six men and six women deliberated for less than two hours in Bowie County, 150 miles east of Dallas.

Reagan Michelle Simmons-Hancock, 21, and her unborn child were murdered by the 29-year-old in New Boston on October 9, 2020.

She stabbed Michelle more than a hundred times and crushed her skull with a hammer before surgically extracting her unborn child Braxlynn Sage from her womb.

Michelle was left to die in front of her three-year-old daughter while Parker fled with the infant child, who eventually died.

In October, following an hour of deliberation, she was found guilty of capital murder.

Michelle’s mother, Jessica Brooks, referred to Parker as “an wicked piece of flesh” and stated, “My baby was still alive and fighting for her babies when you tore her open and ripped her children from her stomach.”

Taylor Rene Parker, 29, was sentenced to death after a jury of six men and six women in Bowie County, 150 miles east of Dallas, deliberated for less than two hours, according to TXK Today.

Emily Simmons told Parker, “You are my only biological sister.” You must comprehend what you have taken from me and my family.

No more birthday celebrations for her. I was just 19 years old when I received the news that my sister had passed away.

“She will never be my maid of honor,” she said. If I visit my sister, I must visit a cemetery and view a tombstone. I will never receive another text message or phone call from her.

On October 9, 2020, the 29-year-old murdered Reagan Michelle Simmons-Hancock, pictured, and her unborn child in New Boston.

According to the prosecution, Parker was so afraid of losing her lover Wade Griffin that she pretended to be pregnant for nearly ten months.

She was already a mother of two, but she had undergone hysterectomy surgery, rendering her infertile.

She fabricated ultrasounds, a gender reveal party, and social media posts about her phony pregnancy while seeking for a victim.

She became Michelle’s buddy since she was pregnant.

Parker, a mother of two who had a hysterectomy and was therefore unable to have additional children, pretended to be pregnant out of concern that Griffin would break up with her.

21-year-old Reagan Simmons-Hancock, a mother of a 3-year-old kid, was murdered by Parker, who befriended her because she was pregnant.

Wade Griffin (pictured) The ex-boyfriend of Parker assumed she was pregnant with his child. On the day of the murder, he informed police he had planned to meet Parker at the hospital to be induced. Parker was desperate to have a child with her then-boyfriend Wade Griffin, according to the authorities, but she did not tell him she had a hysterectomy.

Parker let her friend Reagan to die in front of her three-year-old daughter.

According to prosecutors, Parker murdered Jessica when she was 35 weeks pregnant after researching online how to deliver kids and fake a pregnancy.

After her sentencing, Parker will be transferred to the Mountain View Unit in Gatesville, Texas.

According to court officials, this is where the state of Texas holds its female death row inmates.

The woman, age 29, has the right to appeal her sentence.