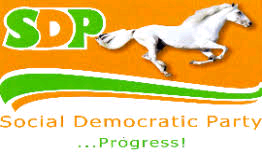 The National Working Committee of the Social Democratic Party, SDP, has reshevelled its national leadership to balance its leadership structure ahead of the 2023 elections in Nigeria.

The National Publicity Secretary of SDP, Mr Rufus Aiyenigba said the appointments came in line with the resolution of the National Executive Committee, NEC, of the party, which held a meeting on March 22, 2022.

The resolution passed said that all National Working Committee positions which were hitherto domiciled in the North be moved to the South, and vice versa.

Mr Aiyenigba, disclosed that the appointments were made according to the provision of the party’s constitution, in accordance with the provisions of Section 12.3.1 of the Constitution of the Party 2018 as Amended.

“The Motion was unanimously adopted by all the members of the National Working Committee, ” the National Publicity, Secretary said.

He added that, “the two new appointments have been duly communicated to the Independent National Electoral Commission, INEC, and was received and acknowledged by the Members of the SDP.”

This change in the national leadership of the Party is part of the process of gearing up for the 2023 general election as well as repositioning the Party as a credible and alternative national platform for internal Democracy to prevail.