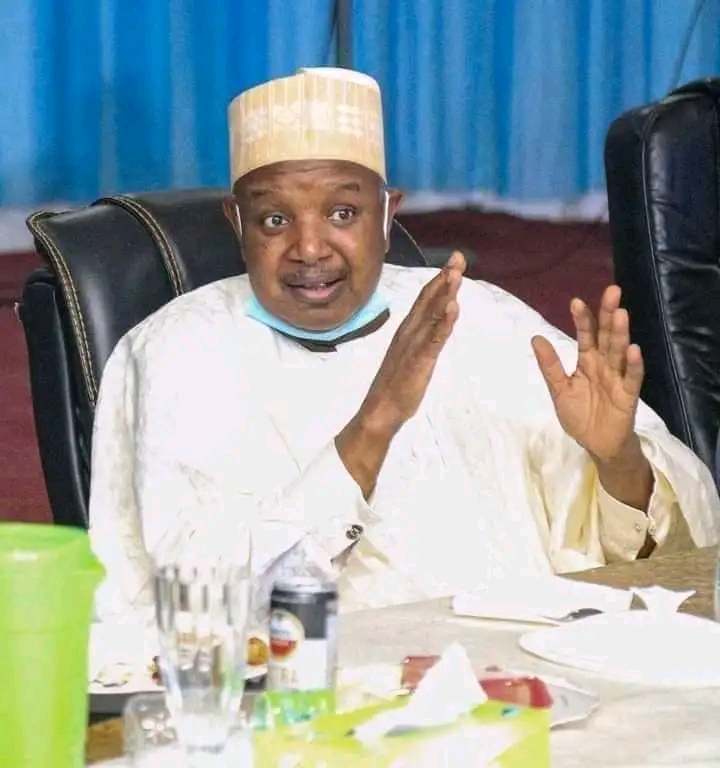 The Kebbi State Governor, Senator Atiku Bagudu, said he has absolute confidence in the ability and capability of the Minister of Justice, Abubakar Malami, SAN, to deliver as Governor come 2023.

He stated this at the APC Stakeholders and party members meeting at the Banquet Hall of Presidential lodge Birnin Kebbi.

Governor Bagudu also welcomed the gesture by the people of Kebbi State, especially the All Progressives Congress, APC, supporters for inviting the Minister to vie for the Office of the Governor in 2023.

Bagudu described the Minister as a trustworthy and proud son of Kebbi state. “He has safeguarded the integrity of the state and performed remarkably well in the cabinet of President Muhammadu Buhari,” he affirmed.

In short, he confirmed that anyone could aptly describe the Minister as the best among his peers.
THE MINISTER’S ROLE ON MARCH 26, APC CONVENTION
In a statement by Bagudu’s Special Adviser on Media, Yahaya Sarki, the governor said that Malami played a crucial role in ensuring the success of the March 26 National Convention of the APC.
The Governor expressed wholehearted support to the yearnings of APC members and other people of Kebbi state for the Minister of Justice and Attorney-General of the Federation, Abubakar Malami, SAN, to contest the governorship of the state in the 2023 general elections under the platform of the party.
Bagudu happily recalled that they successfully conducted the convention to the dismay of many cynics and doubting Thomases.
“He worked round the clock, leaving no legal vacuum or lapse in the convention’s conduct, and this is superb.
“He is an unequalled member of FEC, and he is a worthy representative of Kebbi APC, the people of the state and not only his family.

” I have always been praying to the Almighty Allah to make him President of Nigeria while I am alive and I will not relent in this direction,” Bagudu added.

He recalled that the two of them came from a humble background, which has immensely shaped their visions and missions in life.

GOVERNOR BAGUDU CALLS FOR UNITED SUPPORT FOR THE PARTY
Bagudu urged youths to emulate noble virtues such as those of the Justice Minister, saying, ” doing this will boost the socioeconomic development of the country.”

Senator Bagudu solicited the support of all APC members to strengthen their love for the party by ensuring its victory in forthcoming polls at all levels.

He affirmed his commitment to upholding women and youth development and the upliftment of the socio-economic wellbeing of the generality of the people of the state.

THE MINISTER’S REMARKS
Earlier in his remarks, the Minister of Justice and Attorney-General of the Federation, Abubakar Malami, SAN, had expressed his desire to contest the gubernatorial position on the platform of APC.
“I will certainly vie for this exalted position only if approved by the people of the State.
“I will surely respect the good intention of the people of the state, especially the membership and leadership of our great party, the APC.
“I will do this whether or not they approve of my aspiration. Anywhere the pendulum swings, I will respect their wishes,” the Minister said.

According to the Justice Minister, the governor has the ability and opportunity to contest for three critical positions during the forthcoming 2023 general elections.

Abubakar Malami was emphatic that Senator Atiku Bagudu has catalysed the agricultural and industrial growth of Kebbi state.

He used the forum to enumerate various help and interventions he rendered to the people of Kebbi State, including women and youth in agriculture, entrepreneurship, relief of covid-19 effect, and job placement.

The Minister expressed immense appreciation to all APC members for their collective decision to find him worthy of the office of Governor. In paving the way for him to contest the gubernatorial election in 2023, he urged them to strengthen their support for the party.