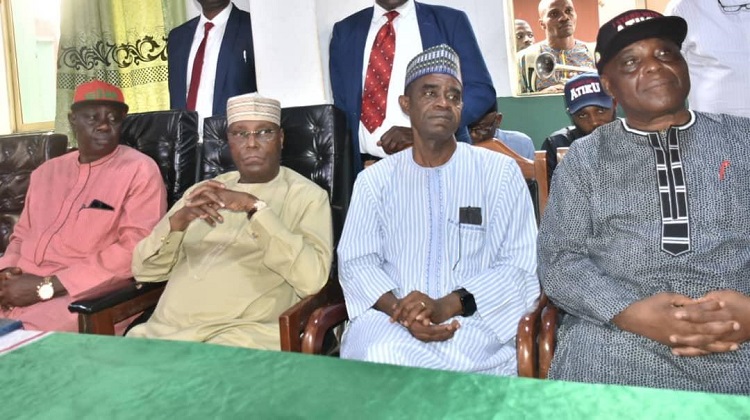 Former Vice President, Atiku Abubarkar, has appealed to members of the opposition People’s Democratic Party (PDP) not to allow any intra-party disagreement to deny them the opportunity of being a better alternative to the ruling All Progressives Congress (APC), in the forthcoming elections.

While addressing the Oyo State delegates of the PDP at the party Secretariat, Molete, Ibadan, on Saturday, Atiku reiterated his commitment to restoring what he described as glorious economic days of the country, if given the opportunity of running the party ticket in the 2023 Presidential Election.

He commended the synergy between Governor Seyi Makinde-led government and the leaders of the party for working harmoniously in a way that has been transforming the state in the interest of the people.

The Turakin of Adamawa, who was accompanied on the trip by High Chief Raymond Dokpesi and Senator Dino Melaye, among others, said the country had never been as disunited and divided as it is presently, promising to give every faith, tribe and group a sense of belonging if he eventually wins the election come 2023.

The former VP noted: “Here today, we have been disunited even in faith because some faith are more preferred than others. This has caused a very wide margin between us and also mistrust between our people. I promise to give every part of this country, every ethnicity, and every religion a sense of belonging if you give me your trust. I also promise to tackle insecurity. Today most part of this country are insecure and the government is unable to cope with the situation.”

Atiku stressed that one fundamental thing he had always preached, even when he was the vice president, is that Nigeria requires constitutional reform to devolve more powers and resources to other components of the country from the states and local government areas.

On his part, the Chairman of the PDP in Oyo State, Dayo Ogungbenro, welcomed Atiku and his team on behalf of Governor Seyi Makinde, while he called on all presidential aspirants of the party to come together and present a formidable consensus candidate for the party ahead of the general elections.