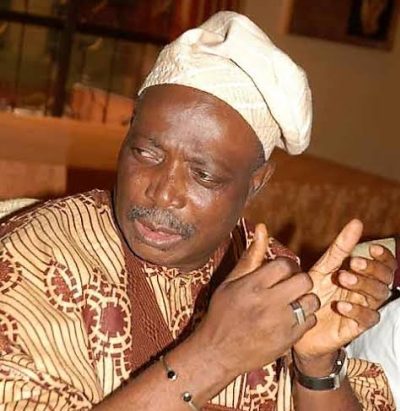 A former governor of Oyo State, Senator Rashidi Ladoja, has described the high cost of nominations forms placed by the two major political parties in the country ahead of the forthcoming 2023 general elections as a show of arrogance.

On Monday, the former governor made the declaration at his Bodija, Ibadan residence, while speaking with reporters after the Eid-el-Fitr prayers.

Ladoja expressed shock at how the cost of nomination forms could be higher than the salary earned by elected political office holders, especially the President and governors. He says with such, politicians would be forced to live above their means, encouraging corruption.

“How much is the salary of a president that they are asking him to pay such amount to get a job of 56 million naira? Is that not going to encourage corruption?

“Are they saying the politicians will live on their means? For a governor, it is about 7 million naira per annum, and you are asked to pay 50 million naira for a job of 28 million naira, that means they are asking them to steal,” he asserted.

Ladoja advised the parties to stop stampeding the people with their conduct and choose people who are not moneybags but are ready to serve.

The former governor played host to politicians from different political parties who visited his residence to pay obeisance and celebrate the end of the Ramadan fast with him.

Some of the notable personalities who visited Ladoja’s residence are the Oyo State Deputy Governor, Rauf Olaniyan; Senator Teslim Folarin; Senator Fatai Buhari and a former Secretary to the State Government, Sharafadeen Alli.

Earlier, at the University of Ibadan Praying Ground, Ibadan, where Senator Ladoja observed his eid prayers, the Chief Imam, Prof. Abdulrahman Oloyede, in his Eld-al-Fitr sermon, urged Nigerian politicians always to remember the citizens in their dealings so that they could walk freely in the society.

He decried the ongoing strike embarked upon by the Academic Staff Union of Universities (ASUU).

The Professor of Arabic and Islamic studies at the University of Ibadan lamented that it is worrisome that those in government could not find solutions to the ongoing ASUU strike, which started over three months ago.