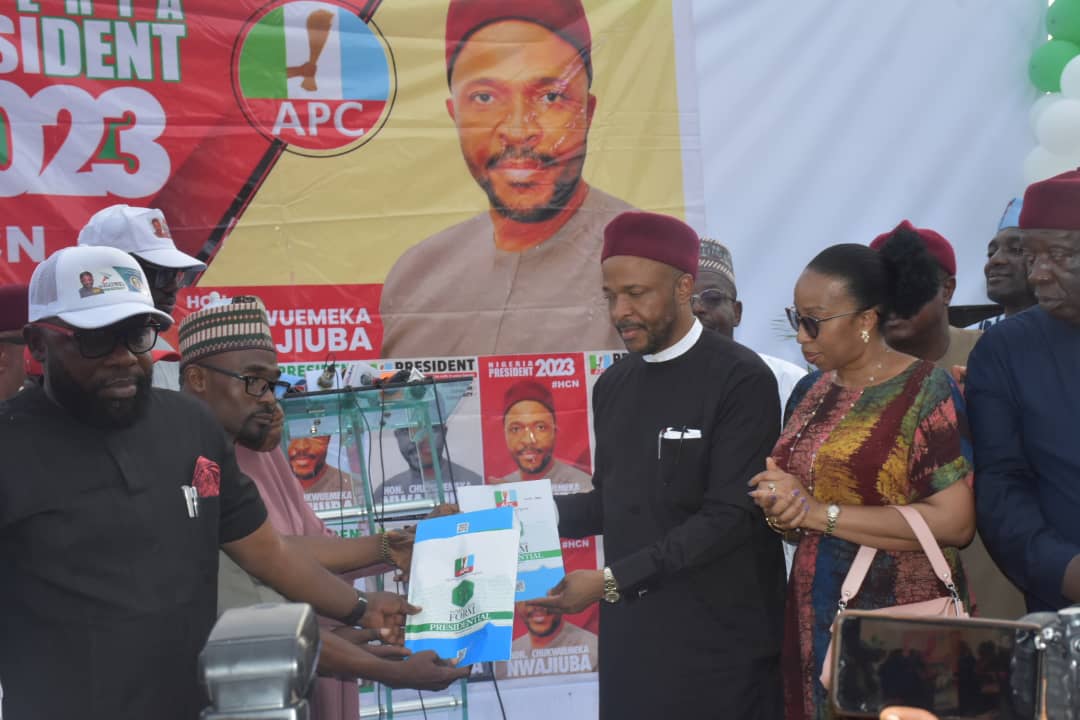 The Minister of State for Education, Chukwuemeka Nwajiuba has accepted expression of interest and nomination form under the All Progressives Congress Party for the office of the President of Nigeria.

Receiving the form on Wednesday, from the Project Nigeria Group, Nwajiuba called on the party to trust him as the new symbol of unity, growth and regeneration.

“I thank with profound respect my fellow Nigerians both those present here and those in all our nooks and cranny, whose desire for a regeneration has led them to identify me as their Chief recruit for the job of moulding Nigeria along the path of its collective dreams.

“They have gathered resources from every part of the country and purchased the form for which the APC will nominate a candidate to fly its flag in the presidential elections in February 2023, they have now presented this to me.

“I now solemnly accept to run for us all, and bear our party’s flag into the elections and become our next President.
“I do this recognizing that in the last 7 years, President Muhammadu Buhari has performed extraordinary feats in ensuring that our progressive ideas have been established; physical infrastructure of every type and inclusive policies reaching out to our poor and less privileged. As we strive to uplift Nigeria and Nigerians into a developed state.
“I propose to take up the paths that builds on the solid foundations that have been laid thus far. Provide different paradigms for new challenges and provide the platform for a vista that accommodates all forces to meet our Nations challenges.”

Acknowledging that the impact of ASUU strike is huge on the Nigerian students, he stressed that the Federal government has continued to appeal to ASUU to seek redress to its means of payment through the Integrated Personnel and Payroll System IPPIS, rather than the University Transparency and Accountability Solution, UTAS.

Speaking on resignation before participating in the election, Nwajiuba said a public office holder is guided by the law of the country, “we are required to resign 30days before the election.

“There are laid down guidelines. There is no one here who has the power to confer on any person when to resign or not. Nigerian law is a tested law on this issue. Anyone who has a challenge on this can go to court.”
Man of the people

The Chairman Project Nigeria, Alhassan Musa Aliu, said Chukwuemeka Nwajiuba was entrusted with the trust of the youths due to his commitment to the Nigerian project.

“Leaders are made, Emeka is made, we need a change, we need people who are tested. He is committed. We are putting forward somebody who is a detribalised Nigerian for Nigerians”
The Coordinator Project Nigeria Group, Sariki Abubakar Dahiru, said different political groups from the 36 States of Nigeria pulled their resources together to purchase the Presidential nomination form for Chukwuemeka Nwajiuba following his antecedents and transparency.

“Because of his transparency, hard work and dedication to his work, he is a detribalise Nigerian, we felt we needed a youth” Dahiru stated.

Also, Dr Ndubuisi Ugochukwu from the PNG, said the country needed a man with ideas, competence, capacity and a man who speaks the language of the 21st century to pilot the affairs of the country.
Ugochukwu said that youths in the six geo-political zones, religious and traditional institutions consulted and came up with the choice of Nwajiuba.