1. Where are most nitrogen compounds excreted from humans?
A. kidneys B. liver C. rectum D skin.

4. A person with Down’s syndrome is born with 47 chromosomes in each cell, instead of 46. What could cause this?
A. A mutation happened during the production of the egg cell.
B. More than one sperm fused with the egg at fertilisation.
C. Radiation caused a change in the structure of a gene in the father’s sperm.
D. The mother was exposed to harmful chemicals while she was pregnant.

5. A red-flowered plant is crossed with a white-flowered plant. All the offspring have red flowers. What is the genotype of these offspring?
A. RR and Rr
B. RR only
C. Rr only
D. rr only.

6. A plant has flowers whose anthers mature and fall off before the stigma is fully developed. What will this prevent?
A. cross-pollination B. insect-pollination C. self-pollination D. wind-pollination.

7. The cell wall of a plant cell is removed using an enzyme. What would happen if this cell is then placed in distilled water?
A. It would take longer for the cell to become turgid.
B. Proteins in the cytoplasm would leave through the cell membrane.
C. The cell would become smaller as water passes out.
D. The cell would burst as water moves into it.

8. Some organisms live at the bottom of the seas where it is very dark. To synthesise glucose, they use energy from chemicals in the very hot water that comes out of volcanoes. What is a distinguishing feature of these organisms?
A. Their enzymes are easily denatured by heat.
B. They do not need carbon dioxide.
C. They do not need to be green.
D. They obtain energy only as carnivores.

10. Why is glucose found in the urine of diabetics?
A. increased uptake and use of glucose by the body cells
B. not enough glucose in the blood is converted to glycogen
C. stored fats in the body are being oxidized
D. too much glucose is absorbed by the kidney cells.

1. a. (i) What is respiration?
(ii) In a tabular form, state four differences between gaseous exchange and aerobic respiration.
b. (i) Explain the term residual air.
(ii) What is the importance of residual air to mammals?
(iii) State four characteristic features associated with respiratory structures.
c. (i) What is oxygen debt?
(ii) Outline three activities that can result in oxygen debt.

ANS: (a) (ii) Differences between gaseous exchange and aerobic respiration Gaseous exchange – Aerobic respiration -oxygen simply moves into the – oxygen is used to oxidise glucose organism and CO2 moves out; -the process takes place outside the cells process occurs inside the cells -physical process chemical process -no energy is released -no enzymes involved
(b) (i) Residual Air. During breathing out/ expiration/ exhalation; not all the air is removed from the lungs; the air left inside the lungs during breathing out is residual air.
(ii) Importance of Residual Air. Air is left in the lungs so that the lungs do not collapse; the air is always left inside the lungs so that more oxygen can be removed (diffuse) into the bloodstream.
(d) (i) Oxygen debt. The build-up of lactic acid; during strenuous exercise is poisonous and makes the muscles ache; oxygen is needed to break down/get rid of the lactic acid; that is why athletes continue breathing heavily even after the exercise is over; the oxygen needed to get rid of the lactic acid is known as oxygen debt.
(ii) Activities that can result in oxygen debt. Running; boxing; swimming /any correct example of strenuous activities.

3. (a) Explain the following terms: (i) disease; (ii) symptoms of diseases
(b) (i) List two physical and two chemical barriers that prevent pathogens from penetrating the body of an organism.

(ii) Explain how vaccination protects the body from contracting infectious diseases.
(c) Distinguish between an antibody and an antigen.
(d) Name the causative agents of: (i) Malaria; (ii) Cholera; (iii) AIDS.

7. (a) (i) What is a gene?
(ii) Differentiate between the terms genotype and phenotype.
(b) Explain the following terms: (i) hybrid; (ii) pure breeding; (iii) nucleotide.
(c) In garden pea seeds, a smooth seed coat is dominant over a rough seed coat. With the aid of a genetic diagram, determine the result expected if a homozygous rough pea is crossed with a smooth seed coat plant whose parent were rough-coated. 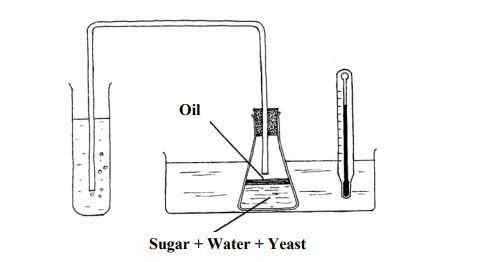 Keep refreshing this page and bookmark it for current answers as we upload them here.