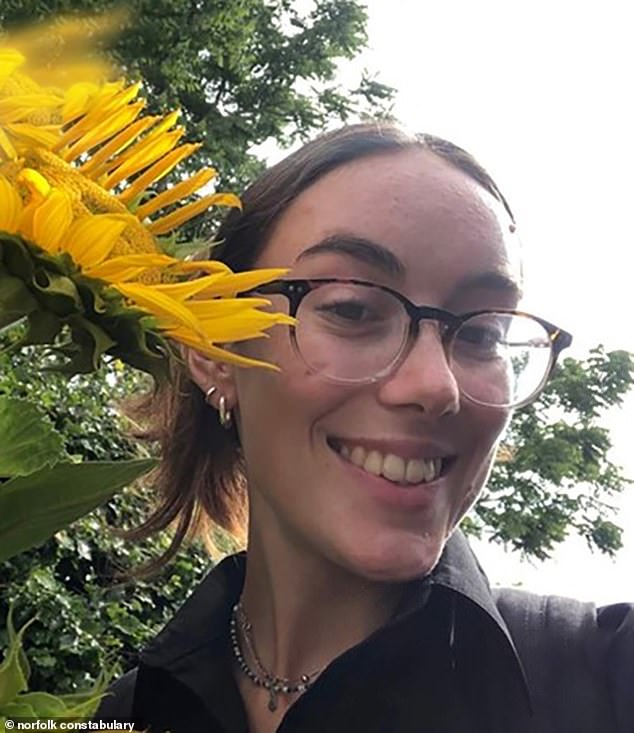 A distraught mother has revealed the final photograph of her daughter, taken just 20 minutes before she was murdered in a hit-and-run collision by a drunk motorist.

Nature-loving Fenella Hawes, age 20, was bringing sunflowers for her mother Margaret when she was struck by a car driven by Malcolm Waite, age 68.

Despite valiant efforts to resuscitate her, the student was pronounced dead at the site of the crash near Stalham on the Norfolk Broads.

Mrs. Hawes shared the photograph of her daughter smiling and posing with her flowers after Waite was sentenced to eight years in prison for driving while nearly five times the legal alcohol limit.

Fenella Hawes, age 20, was bringing sunflowers for her mother Margaret when she was struck and murdered by a drunk motorist who fled the scene.

A 16-year-old girl who was strolling with her at the time of the accident on the A149 at 4.30 p.m. on July 31 this year escaped with minor injuries.

At the Norwich Crown Court, Waite of Hoveton, Norfolk, admitted to causing death through reckless driving. In addition, he was prohibited from driving for seven years.

The court heard that he did not stop after hitting Lancaster University student Fenella, who was enrolled in Natural Sciences.

He continued driving his Lexus RX SUV for a further mile until he hit with a road sign, trees, and bushes.

Officers discovered him seated in the driver’s seat, reeking of booze, and holding a partially consumed bottle of vodka.

Officers discovered Malcolm Waite, 68, seated in the driver’s seat, reeking of alcohol, with a partially consumed bottle of vodka next to him.

A body camera worn by one cop captured him slurring his remarks and wrongly accusing another officer of cursing at him.

Before being detained and sent to James Paget Hospital in Gorleston, near Great Yarmouth, Waite, a retired computer engineer, refused to submit to a breath test.

Four hours later, a breath test at the Great Yarmouth Police Investigation Centre found that he had 120 mcgs of alcohol on his breath.

Officers estimated this would have been around 158 micrograms if measured at the scene of the accident. The permissible maximum is 35 mcg.

The inquiry by the police determined that Waite’s car was not defective and that the weather and road conditions were ideal.

During police interviews, he answered every inquiry with silence.

The court heard that Fenella and the youngster were walking home from work when they were struck by Waite’s vehicle after witnesses observed it swerve across the road.

Mrs. Hawes detailed the death of her daughter in a victim impact statement, stating, ‘I cry every day, when I wake up, during the day at seemingly random moments, and when I go to bed.

I see her going along while carrying sunflowers for me and being struck by a vehicle.

Fenella was a talented student who studied Natural Sciences at Lancaster University, where she was awarded a trip grant to Honduras. The police referred to her as a “wonderful young lady.”

“I weep for the future she will never have because a drunken guy chose to get into a car knowing it was a lethal weapon, and it did murder someone.” My 20-year-old daughter was slain.

She was a young adult just beginning her life, and her promising future was snuffed away in a matter of seconds by someone who did not consider or care.

“I cry because she was so joyful: she was so beautiful on the inside and out; she was so vibrant; and now she is gone and will never return. I never got the opportunity to say goodbye.

Andrew Oliver, for the defense, stated that Waite had a lengthy history of melancholy and alcoholism.

During the pandemic, he and his wife relocated from Leicestershire to Norfolk, but he left because to his unpredictable behavior, and she filed a restraining order against him.

Mr. Oliver continued, “He feels deep regret for his actions.” He is aware that he has caused Fenella’s family and friends much suffering.

After the hearing, Detective Inspector David McCormack of the Norfolk Police Serious Collision Investigation Unit stated, ‘This is a tragedy that was entirely preventable.

“I ask anybody who believes it is OK to consume alcohol and then operate a motor vehicle to recall the heartbreaking and tragic effects of drinking and driving so clear in this instance. Waite’s decision to drink and drive has irrevocably altered lives.

“The adolescent who, together with Fenella, was heading home from work that day is traumatized by what has occurred.

PC Callum Walchester, who detained Waite at the scene, stated, ‘I’ve been a PC for ten years and worked in roads policing for over six years, and he was the drunkest driver I’ve ever seen’

“Waite must spend the rest of his life with the knowing that he took the life of a great young woman who had so much to contribute and so much she wanted to accomplish. He has caused so much suffering to so many individuals.

PC Callum Walchester, who detained Waite at the scene, stated, “I’ve been a PC for 10 years and worked in roads policing for over six years, and he was the drunkest person I’ve ever seen driving a car.”

The institution awarded Fenella a posthumous first-class degree after the catastrophe.

At the time of her passing, her family issued a statement that she will be “greatly missed by those who knew and loved her.”

Their statement said, ‘She made the world a better place with her vibrant personality and illuminated our lives with her laughter and eccentric sense of humor.

She could hardly pass a cat without stopping for a picture session, and she and her boyfriend were looking forward to visiting a cat cafe.

Her fondness in local hikes in the woods, on the beach, and most recently in The Lakes demonstrated her appreciation of the natural world.

She was a successful student who had finished two years of university-level Natural Sciences studies and had a trip to Honduras sponsored by a scholarship scheduled for the future.