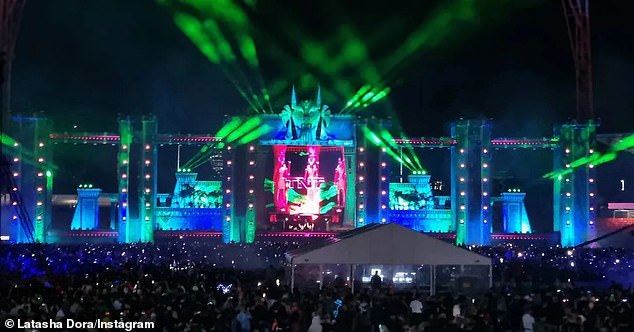 Despite the introduction of amnesty bins and a substantial police presence with sniffer dogs, 18 people at two music festivals were sent to the hospital due to drug overdoses during a harrowing weekend.

On Saturday night, Australia’s party season began with Knockout Outdoor at Sydney Olympic Park and Listen Out at Centennial Park, with tens of thousands of revelers in attendance.

Over seventy persons were arrested for drug possession, and four for drug distribution.

Thankfully, no fatalities have been reported.

Eighteen people were hospitalized and dozens more were evaluated for suspected drug overdoses during both gatherings (pictured, revellers at Listen Out)

Arrests and hospitalizations occurred despite the presence of drug amnesty bins at both events, where attendees may dispose of drugs without fear of arrest.

The policy was enacted as a result of a coroner’s inquest into the deaths of six young people at music festivals in New South Wales between December 2017 and January 2019 that was completed in 2020.

The inquest also suggested a number of further measures, such as pill testing, the elimination of the employment of sniffer dogs, and a reduction in the frequency of strip searches.

The government rejected all recommendations about the employment of police dogs to prevent drug use over the weekend.

On July 22, 2022, at the entrance to Splendour in the Grass 2022 at North Byron Parklands, police officers and a drug detection dog circulate among festivalgoers.

Police expressed satisfaction with crowd behavior in general, but noted that some individuals continue to place their health and safety at grave danger.

“Illicit substances are destroying the social fabric. Asst. Commissioner Stuart Smith, commander of the South West Metropolitan Region, stated, “Drug dealers view drug consumers as a commodity market and have little regard for the consequences of drug usage.”

‘Police will continue to conduct high-visibility operations to combat the use, possession, and distribution of illegal substances, as well as antisocial behavior and alcohol-fueled violence, especially when large-scale events continue to return during the summer months.

Over 44,000 individuals attended Knockout Outdoor, which ran from 2pm until 11pm.

Despite the arrests, police stated they were largely pleased with crowd behavior (pictured, festival goers at Knockout Outdoor)

Twelve party-drug users were brought to the hospital with suspected overdoses.

At the occasion, 24 persons were detained for narcotics trafficking. While three others were charged with drug distribution.

Listen Out was attended by 21,000 individuals and began on Saturday at noon.

Six individuals were hospitalized, while 49 partygoers were charged with narcotics possession.

One 19-year-old was handcuffed and accused with drug distribution. Four further individuals were arrested for assaulting police officers.

»18 overdoses at Knockout Outdoor, Listen Out«