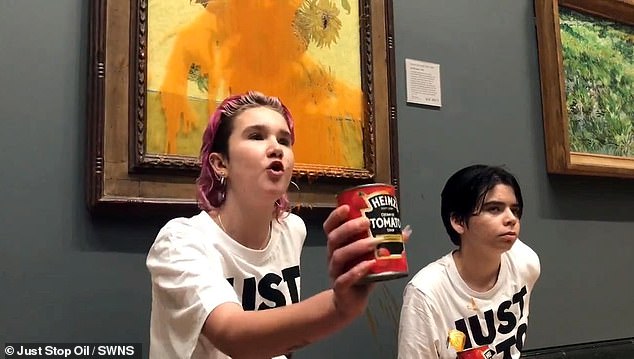 During a protest at the National Gallery in October of last year, Phoebe Plummer, 21, and Anna Holland, 20, were captured on camera opening a can of soup and pouring it over “Sunflowers.”

The piece of art was shielded by glass and unharmed, but on October 14, 2021, the two were charged with causing frame damage.

The choice of soup was meant to allude to the UK’s rising cost of living crisis.

“I’m Phoebe, I’m 21, I’m from London, and I am one of the persons that flung a can of soup at Vincent van Gogh’s Sunflower artwork,” Plummer later claimed in a TikTok video.

While Plummer showed up in Southwark Crown Court with pink hair dye and an orange miniskirt, Holland was sporting a t-shirt with sunflowers and the word “Vincent” emblazoned on it.

Both Plummer of Lambeth in south London and Holland of Newcastle Upon Tyne denied causing criminal damage.

The soup served to the protesters on October 14 at the National Gallery was meant to be an allusion to the UK housing crisis.

The £76 million work of art was ‘unharmed,’ according to the police, during the climate protest. Phoebe Plummer and Anna Holland are seen while a can of tomato soup is hurled across the artwork.

The questions, according to prosecutor Jennifer Oborne, include the extent of the frame’s damage, whether the defendants knew or should have known that the frame would be harmed, and whether a conviction would be excessive given their right to freedom of speech.

Prior to their trial on July 22, 2024, they were given bail under the condition that they stay off the grounds of any art galleries or museums.

In accordance with the terms of their bail, they are also forbidden from possessing glue, any adhesive materials, or paint in a public area.