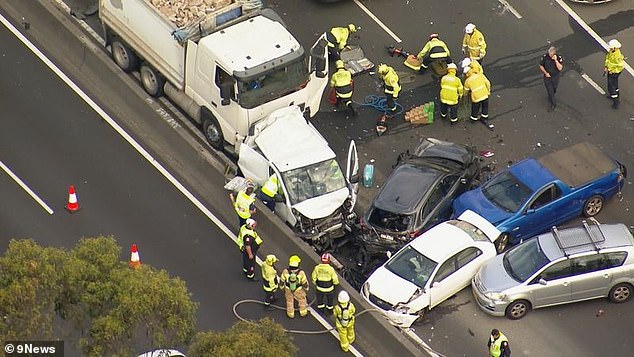 At least 18 people were sent to the hospital after a horrific accident on Sydney’s M4, which caused a significant traffic backup.

Friday around 4.40 p.m., a truck and eight cars collided on an interstate in Prospect, in the city’s west, causing 11 kilometers of backup.

Emergency personnel were had to extricate a man from his van after he became stuck inside.

The man was transported to Liverpool Hospital, where he is reported to be in critical condition.

It is believed that the majority of drivers involved did not sustain significant injuries; nevertheless, two were transported to Westmead Hospital.

According to NSW Police, the truck driver was brought to Blacktown Hospital for obligatory testing.

According to NSW Police, the truck driver was brought to Blacktown Hospital for obligatory testing.

The accident occurred during the evening rush hour in Sydney, when commuters were stuck in over 11 kilometers of backed-up traffic.

Drivers have been encouraged to completely avoid the M4 and instead utilize the Great Western Highway.

All M4 westbound lanes are closed, and traffic is being rerouted to the Reservoir Road exit.

The traffic jams on the eastbound lanes of the interstate continue for more than 5 kilometers.

On scene are emergency services and traffic crews.