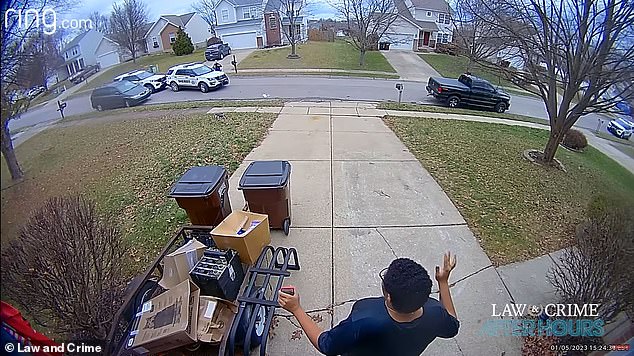 Armed police in Kentucky reacted to a 911 call from a 17-year-old who claimed to have murdered two people, only to discover that the call was made accidentally while the boy was playing a video game (a practice known as “butt dialing”).

During a 4-minute contact to emergency services, Sierocki unwittingly confessed to a double killing, leaving the adolescent “trembling for 4 hours” as police investigated his home.

The 17-year-old shared video of the event, in which he is seen attempting to explain the botched call to cops while they are holding firearms immediately in front of him.

Sierocki raises his arms as he exits his house and starts to explain to the responding cops why they didn’t need to send a dispatch so quickly after receiving the call.

He can be heard stating, “I was playing the game and I butt dialed the phone,” with what sounds like a trembling voice as he addresses armed police officers.

Sierocki stands transfixed at his front door and hears the armed cop ask, “OK, are you sure?” from a distance.

‘What? It’s only me at home,’ Sierocki continues.

Call him to you, one of the officers said. Another can be heard telling Sierocki to keep moving toward the police as he slowly leaves the house.

In the Ring camera video, an officer who is seen off-screen inquires, “Everyone inside, OK?”

The only person inside, according to Sierocki, is me.

OK, bring him out, one of the officers said. What’s your name, buddy? As Sierocki approaches the cops, another question can be heard.

Then Sierocki is seen spinning around with his arms still in the air as the cops approach him.

Then, while one cop places handcuffs on him and another continues to aim a pistol at him, he lowers his arms and puts them behind his back.

Were you using a video game console? One of the policemen queries. Another said, “Yeah, he claimed he was.”

In an interview with Law&Crime’s Sam Goldberg for his podcast, Following Hours, Sierocki claimed that he was unaware of the call until he grabbed for his phone to watch a TikTok after the video game kill.

So I opened my phone to watch TikTok since that’s what I did when I died, and then I saw a call come through. 911,” he declared.

“I began to panic.” The dispatch called me three times in an effort to find out what was going on.

“My dogs are really clever dogs, and they rush over to me at the sofa in the other room and they run back to the front door in no more than two minutes after they start barking at the front door.”

The adolescent said that he believes the emergency call function on the iPhone, which activates when both the volume and power buttons are depressed simultaneously, was used to place the call.

He responded, “There are four police patrol vehicles out there.”

I can either remain inside and answer the door when they knock, or I can go out into the street holding up my hands.

So, I ask myself, “What could possibly go wrong if I go outdoors with my hands up?”

He said that as soon as he stepped outside, he saw that the sheriff’s deputy to his right was pointing a revolver at him.

He terrifies me, Sierocki said. He “sort of jumped a little bit,” I said.

The boy said that during the subsequent encounter, while the pistol was still pointing at him, he was questioned about what was truly happening, given a pat-down, and requested to put his hands behind his back.

A buddy who had also attended the Xbox online party concurred with Sierocki’s statement that he was “visibly shaking so hard.”

The companion said, “He was terrified that a pistol was pointing at him.”

However, following his trauma, police had a cordial conversation with the enthusiastic player.

The question, which refers to the playable characters in the computer game that the 17-year-old had been engrossed in before police arrived, is posed to Elijah as he is being detained: “Who is your favorite operator?”

A Boone County Sheriff’s Office representative indicated in an email to the outlet that they would “need to understand more about the situation before offering a statement.”

According to them, they were “assembling body worn camera footage in response to an open records request” made by Law&Crime.

According to Sierocki, there are no resentments: I have admitted to killing two individuals. I can see what they’re going for.

They conducted the process in a very professional manner. They did a good job of handling things.

On December 1, 2015, it was made available globally for Microsoft Windows, PlayStation 4, and Xbox One.