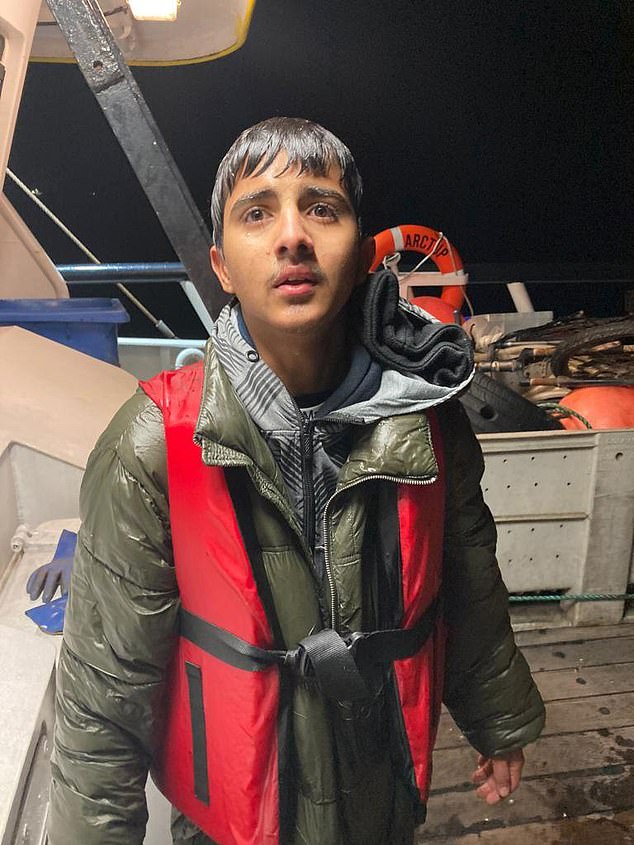 A little kid who was saved from a Channel boat disaster last month fled Afghanistan after the Taliban murdered his family, according to the captain of the rescue vessel.

After their frail dinghy capsized in the English Channel on December 14, four individuals perished and more than thirty others were rescued by a fishing crew.

Captain Raymond Strachan, 54, was awakened shortly before 3 a.m. by his crew, who had discovered migrants helplessly clinging to the side of their boat in the frigid waters.

Captain Strachan stated that the youngest survivor was a 12-year-old child whose parents were murdered by the Taliban.

The inflatable boat’s floor had torn because there were too many passengers on board.

The migrants informed Captain Strachan that they had each paid £5,000 to a smuggler in France for passage to the United Kingdom.

Each individual received a warm shower before receiving the crew’s dry gear and being wrapped with comforters to raise their body temperatures.

He reported to The Sunday Post, “The sea seemed quiet, but there was a spooky cloud on the water.” The first individuals we rescued were extracted from the water. They were swimming towards us.

He reported that at than 40 people were attempting the passage in a 12-person inflatable dinghy.

The captain reported how the dinghy’s floor had ripped due to overcrowding, allowing water to enter.

He continued, “One of the youngest individuals we captured was an Afghan youngster.” I spoke with him first because he appeared so young. When asked his age, he responded that he was 12 years old.

I removed his wet clothing and life jacket and instructed him to descend and have a warm shower. We ensured that he was warm, dry, and secure. Two additional Afghan children, aged 12 and 13, were saved by my crew.

A police officer called him a few days after the rescue with a message from one of the 12-year-old boys.

‘He stated he wanted to thank us for saving his life, as he believed he was going to die that night. He claimed he fled Afghanistan because the Taliban murdered his entire family, Strachan said.

The county authority of Kent has taken into care twelve youngsters who were on the dinghy.

More than thirty were rescued from the frigid waters by the courageous crew of the 80-foot scallop boat Arcturus, but four more perished in the tragedy.

Charles Blyth is the safety officer for Oceanic Drift Fishing, the owner of the vessel that rescued the migrants.

In December, he stated on Radio 4’s Today programme, “The vessel was around 30 miles into the Channel at the time.” The captain was sleeping while the first officer was on duty.

“As soon as the first mate spotted the casualty vessel, the alarm was sounded, the captain was awakened, and the coastguard was notified while the dinghy was carried alongside the fishing vessel.”

They were the first to arrive on the scene and immediately began attempting to pull everyone from the sea.

I think that the RNLI and the navy sent additional forces to the location shortly after the rescue was began.

He continued, “I believe that as soon as the people on the dinghy saw our fishing vessel, many of them began to leap off and swim towards us.”

I must emphasize how dangerous that environment is. At the time, our yacht was engaged in scallop dredging and fishing.

I am aware that the captain quickly raised the equipment above the waterline to better the agility of our vessel and to offer a platform for these individuals to cling to while we attempted to collect them.

Last month, Prime Minister Rishi Sunak expressed’regret’ over the ‘capsize of a tiny boat’ in the English Channel, telling MPs that there had been a ‘tragic loss of life’

Captain Raymond Strachan, 54, was awoken at 3 a.m. by his crew, who had discovered persons in the frigid seas.

Survivors reported paying £5,000 per person to a people-smuggling gang for the crossing.

A spokesman for a French charity reported receiving a phone call in the wee hours of the morning from migrants aboard a sinking boat pleading for assistance, with the sounds of babies crying in the background.

A government official stated, “At 03:05 this morning, authorities were notified of an incident involving a distressed migrant boat in the English Channel.”

“After a coordinated search and rescue operation led by HM Coastguard, it is with regret that four confirmed fatalities have been attributed to this tragedy.

“Investigations are ongoing, and we will offer additional details in due time.”

This incident is extremely tragic. Our thoughts are with the loved ones of all those who perished today.

The number of individuals rescued was initially reported by government sources as 43, however it has subsequently been amended to 39 based on additional information from authorities concerned.

Nikolai Posner, the communications officer for Utopia 56, an organization that assists migrants in Calais, stated that a 22-second WhatsApp audio message was placed at approximately 2:00 a.m. UK time.

Mr. Posner stated that in the communication, a man can be heard stating that there was water inside the boat with “people and children” on board.

After the migrant boat carrying more than 30 people sank in the chilly English Channel, a massive rescue mission was initiated. One of the RNLI rescue boats gets encircled.

He stated, “It was obviously an emergency, since he was requesting assistance… We can hear children crying in the backdrop of the message.

Mr. Posner explained that the organization attempted to respond to the message but did not receive a reply; they subsequently called both the French and British coastguards.

Mr. Posner stated that it is unknown why a rescue boat was deployed an hour after the charity alerted authorities to the distress signal, adding, “We do not know what actually transpired during that period.”

In an audio recording of the voice note obtained by Channel 4 News, a man can be heard stating, ‘We’re on a boat and we’re having trouble. Please assist. A boat has children and families.

“Water is entering.” We have nothing for this, for a sense of safety. Please assist me, sir. Please, kindly. We are immersed in water. We belong to a family.

Sky News footage showed a group of people in a dinghy that was sinking and filling with water being dragged over the side of a boat using a rope.

At 3:07 a.m., RNLI lifeboats were launched from Dover, followed by lifeboats from Ramsgate and Hastings.