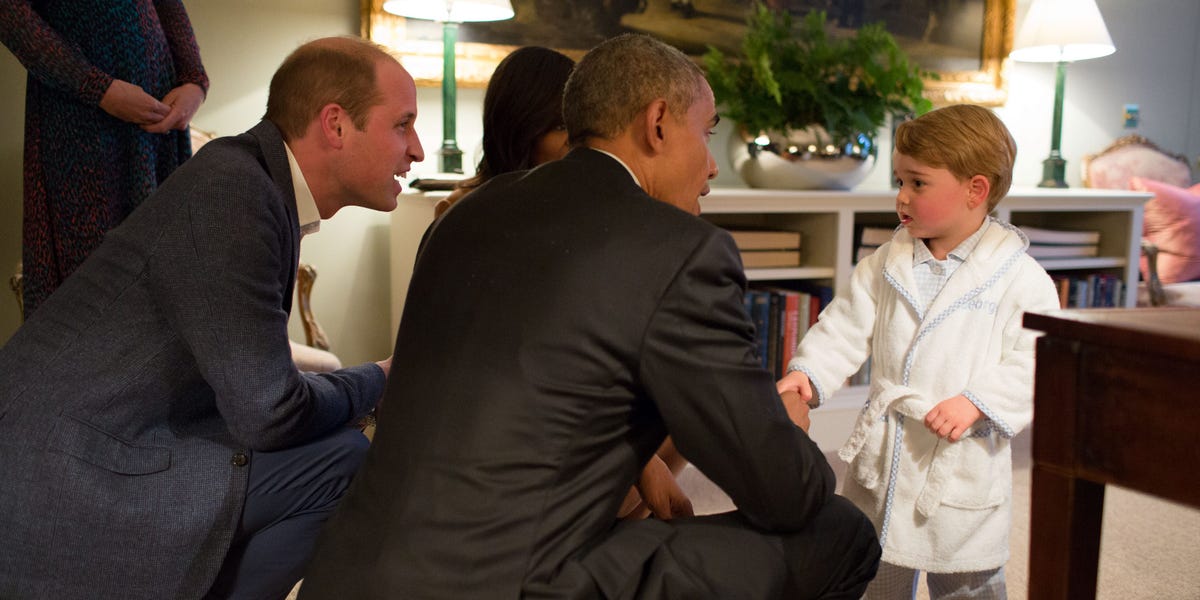 In 1959, President Dwight Eisenhower accompanied Queen Elizabeth on a visit to Balmoral Castle in Scotland.

The Nixons hosted King Charles (then Prince of Wales) and Princess Anne during their first visit to the White House in 1970.

On the South Portico of the White House in 1970, from left to right: King Charles (then Prince of Wales), President Richard Nixon, Princess Anne, and first lady Pat Nixon.

The president and first lady of the United States, Richard Nixon and Pat Nixon, showed Charles and Anne around the South Portico balcony of the White House.

In 1977, President Jimmy Carter and the Queen and Prince Phillip conversed in the Blue Room of Buckingham Palace.

In 1977, President Jimmy Carter visits Buckingham Palace alongside Queen Elizabeth and the Duke of Edinburgh.

Reportedly, Carter violated royal decorum when he kissed the Queen Mother on the lips.

According to BBC, the Queen Mother commented following the encounter, “I took a significant step backwards, but not quite far enough.”

In 1982, the Queen and President Reagan rode horses together.

In 1982, Queen Elizabeth and President Reagan rode horses through the grounds of Windsor Castle.

Princess Diana and John Travolta danced at a White House dinner in 1985 while the Reagans watched.

In the PBS series “In Their Own Words: Diana, Princess of Wales,” Travolta stated that Nancy Reagan told him that Diana wanted to dance with him, so he asked her to join him on the White House dance floor.

“The entire room emptied,” Travolta stated. “We appeared to have danced for 15 minutes… It was a scene from a fairytale. We bowed at the conclusion of the event, and then she left, and I left, and my chariot turned into a pumpkin.”

During his 2000 visit to the United Kingdom, President Clinton coordinated with the Queen by wearing a red tie.

Anita McBride, former chief of staff for first lady Laura Bush, previously revealed to Insider that the Queen’s seamstress coordinates with the first women’ staff to ensure that their dresses do not clash during visits.

In 2007, the Queen made fun of President George W. Bush for incorrectly stating that she had celebrated the US bicentennial in 1776.

In 2007, Queen Elizabeth and President George W. Bush met at the residence of the British ambassador in Washington, D.C.

After adding 200 years to Queen Elizabeth’s age during a White House welcoming ceremony, Bush smirked and said, “She gave me a look that only a mother can give to a kid.”

Two days later, at a supper thrown by the residence of the British ambassador, the Queen quipped, “I wondered if I should begin this toast by saying, ‘When I was here in 1776…'”

Bush said in his toast, “Your Majesty, I can’t top that one.”

The location of Kensington Palace

“Initially, it was unclear if I would be allowed to capture the president with Prince George,” Souza wrote of the portrait. “However, the night before, our advance team informed me that Kensington Palace had granted me permission to take candid images during their visit. Later, this shot received the most attention, but at the time, all I could think about was how the table on the right was preventing me from capturing this moment from the optimal angle.”

Even after his presidency ended, Obama remained close with Prince Harry, attending the Invictus Games in 2017.

Obama and Harry shared a chuckle while watching wheelchair basketball at the 2017 Invictus Games for wounded warriors in Toronto, Canada.

During President Donald Trump’s visit to Clarence House in 2019, a photographer’s flash diffuser slipped off, creating a candid moment.

In 2019, King Charles (then Prince of Wales) picks up a diffuser that fell off a photographer’s flash as he and Camilla, the Queen Consort (then Duchess of Cornwall) approach a room at Clarence House to have tea with President Donald Trump and first wife Melania (behind).

During their state visit to the United Kingdom, the Trumps drank tea with Charles and Camilla at Clarence House.

At a gathering for the COP26 UN Climate Change Conference in 2021, President Joe Biden dispensed with customary royal niceties and placed a hand on William’s shoulder.

»12 candid photographs of royals and US presidents in funny, unforeseen moments«